147 Votes to 28! MPs vote against the badger cull in House of Commons debate 25th October 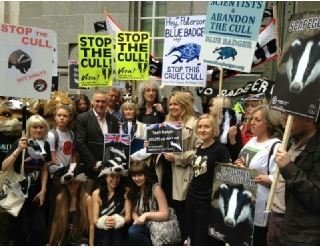 Henry Smith MP kindly agreed to be co sponsor for the application to the Back Bench Business Committee with Conservative MP Mike Weatherley at the request of our Co Founder, working as a member of Team Badger. This application succeeded in securing the badger cull debate with other cross party MPs. Both MPs are much appreciated for their  great speeches against the cull at the badger cull debate along with many other  MPs.

We are delighted with the success of the badger cull debate yesterday , the 25th October in the main chamber of the House of Commons. Blue Badger is a member of Team Badger, the animal welfare coalition of more than 12 leading animal welfare organisations who all work together to campaign against the unnecessary badger cull which includes Brian May of Queen and the Founder of Save Me. We support the scientific evidence against the cull and believe that vaccination for badgers and cattle is the way forwards not a badger cull.

We were  also delighted when Conservative David Amess MP, who wore our Blue Fox badge at the Conservative conference in Birmingham, thanked Dr Brian May and the Co Founder of Blue Badger ( also Blue Fox) for helping him and other MPs with assistance and information on the badger cull issue.  The whole debate can be seen here:

We are delighted and applaud the vote and will continue to work as a member of Team Badger to protect badgers against the cull.We want to thank all the tens of thousands of people who signed the petition against the cull in order for the debate to take place. People power achieved this result. The vote is not legally binding yet it does demonstrate the will of Parliament and the support of MPs against the cull.

The Guardian headline 25th October 2012 : MPs have delivered another blow to the Government’s controversial plan to cull thousands of badgers to prevent TB in cattle, voting against the policy by 147 votes to 28.

The parliamentary vote is not binding on the Government, but will be seized upon by animal welfare groups as evidence that both public and parliamentary opinion is against a cull.

A marathon five-hour backbench debate in the House of Commons was called after an e-petition launched by Queen guitarist Brian May attracted the signatures of more than 150,000 opponents of culling. 175 out of 650 MPs voted on the petition

For media coverage on the badger cull and links to various newspaper articles  please click on this link : http://www.scoop.it/t/bovine-tb-badgers-and-cattle