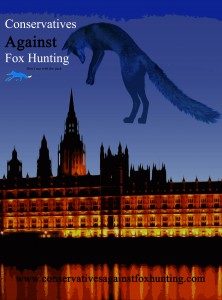 On this Boxing Day, Conservatives Against Fox Hunting (Blue Fox) calls for  the Conservative Party leadership to guarantee that the new Conservative Manifesto will not include any pledges to undermine the 10 year old Hunting Act 2004.

For too long, the party leadership has appeared to be swayed by the hunting lobby rather than representing the majority of the public’s support for the ban on hunting with dogs.Calls for a relaxation or repeal of the hunting ban perpetuate a dated outmoded image. There are an increasing number of Conservative MPs who are prepared to resist repeal and say no to a return of banned sports.

‘We were delighted in October this year to be invited, on behalf of the Prime Minister,  to discuss advancing  animal welfare issues with the MP responsible for the environment on the No.10 Policy Board. We discussed our Blue Fox Manifesto proposals as we are keen to see animal welfare objectives advanced within the Conservative Party and across all political parties. We pointed out the ‘Repeal issue’ is cruel to our wildlife and toxic to the perception of the Conservative Party.

There is an excellent opportunity to dump the worn out hunting issue behind and promote a modern manifesto with an invigorated commitment to advance positive animal welfare objectives which appeal to our whole society.  A YouGov poll in 2014 showed that 14% of voters named animal welfare as an issue that would determine their vote. It came directly behind defence and ahead of HS2 or same sex marriage. MPs are contacted on animal welfare issues more than any other issue.’

As we head towards the election in a few months’ time, political parties throughout the UK are finalising their party manifestos. We encourage people to contact their MPs and candidates to ask them about their standpoints on hunting with dogs and ask them to support the ban.’

The legislation prohibited the hunting of wild mammals, including foxes, deer, hares and mink with dogs, something which the vast majority of the British public opposed and continue to oppose. The latest poll carried out by Ipsos MORI for the League Against Cruel Sports in Dec of 2014 shows that 80% of people in Great Britain think that fox hunting should remain illegal and 88% think that hare hunting and coursing should also remain illegal.

The new Blue Fox, Blue Badger and Blue Hare film has an important message for the Conservative Party leadership and the 2015 Manifesto.