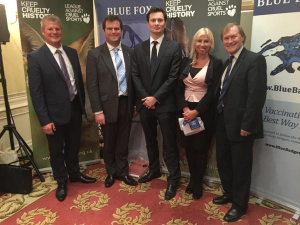 A second attempt to repeal the ban on fox hunting would face stiff opposition in Parliament, as Labour, Lib Dems and even Tories vow to block the motion.

The Government abandoned its first efforts at reform last summer, after the Scottish Nationalist Party threatened to intervene.

It is understood that ministers are determined to try again, but with little chance of success amid threats of a backbench rebellion.

The Conservatives included a pledge to hold a free vote on repealing the hunting ban in their 2010 and 2015 manifestos.

Last July, the Government finally put forward an amendment to the 2004 Act, which would have removed limits on the number of dogs hunters can use to flush out wild animals.

The proposals were pulled before they were even put to a vote, after the SNP threatened to join Labour in blocking them.

However, the Telegraph reports that the new Defra secretary Andrea Leadsom is determined to hold a free vote before the next election.

It is not clear whether MPs will be asked to vote on the same plans, or if ministers will aim for full repeal. But either way, a defeat in the Commons is likely.

The Lib Dems have already stated they will fight the legislation “tooth and nail”.

Environment spokesman Baroness Parminter said: “The ban has been proven to work, and has protected our wildlife while allowing rural sports like drag hunting to continue”.

Labour MP for Exeter, Ben Bradshaw said it was “extraordinary” that ministers would focus on fox hunting amid the challenges posed by Brexit.

He added: “It shows how out of touch they are with most people’s priorities. If they do, I shall vote against this unnecessary cruelty, as I always have.”

Kevin Foster, the MP for Torbay, is one of a number of Conservative MPs who support the anti-hunting group Blue Fox.

He suggested opposition within the party would be strong enough to bring down hunting legislation, even if the SNP were excluded from voting.

“I haven’t seen any great drive from the Government to spend time on this in the near future, but I’m interested to note the speculation and of course Andrea Leadsom has made her views known,” he said.

“I think we can see from what happened last year that the chances of a full repeal going though are very, very small.”

The pro-hunt lobby are not optimistic about the likelihood of reform, with the Telegraph reporting that they put the chances at 100/1.

Tim Bonner, chief executive of the Countryside Alliance, said there is “an ingrained political prejudice” which means achieving reform “will remain difficult”.

“We will, however, work with the Government to achieve just that,” he said.