We were pleased to see our press release reported in several national newspapers on Boxing Day.

Boxing Day is one of the main days in the hunting calendar.

The ban was introduced almost 11 years ago and long may it continue, to protect our wildlife from hunting with dogs

Blue Fox in the press on Boxing Day:

BBC News: Fox hunting: Parliament has ‘better things to do’ than repeal Act 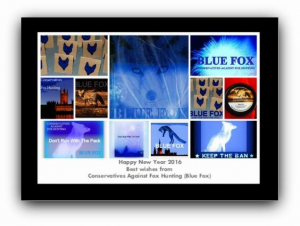 The Guardian: Foxhunting should be ‘consigned to history’, says sports minister

The Telegraph: Tory minister condemns party’s pledge for vote to bring back hunting with dogs

The Yorkshire Evening Post: More Tory MPs ‘refuse to run with the pack’

The Western Daily Press: The 57 Tory MPs who will defy David Cameron and vote to keep the hunting ban