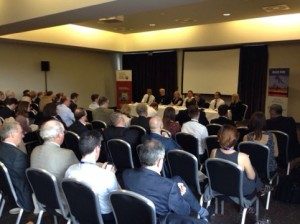 Blue Fox- Conservatives Against Fox Hunting held its third joint fringe with The League Against Cruel Sports on animal welfare’ Why Animals Matter’ at the Conservative Party Conference in Birmingham on Monday 29th September.

Chris Platt welcomed the audience to the discussion and introduced the Speakers. He spoke of his retired positions as the former Chairman and president of Esher and Walton Conservatives and being a fellow Co founder of Blue Fox. He spoke on an Ipsos Mori poll in 2014 had demonstrated that 14% of voters named animal welfare as an issue that would determine their vote, more than HS2 or equal marriage.

Michael Stephenson started the speeches by showing the audience Ipsos Mori polling in 2013 by the League Against Cruel Sports that 69% of Conservatives support the ban on fox hunting. He spoke of the polls results that seven out of ten Conservative voters do not want to see a return to legal fox, deer or fox hunting. More than half of Conservative voters will view candidates more favourably at the next election if they oppose making hunting with dogs legal again. Less than 1 in 10 would regard candidates more favourably if they support repeal of the Act.

Neil Parish MP talked on his support for the repeal of the hunting ban and the badger culls. He spoke on his concern on puppy farming, the cruelty of the dog meat trade and his support for further protection of hares in the form of a close season.

Anne Main MP made a speech against the badger cull and that if badgers could be cage trapped to be shot in the culls then they could be vaccinated instead. Anne talked on the issues of fly grazing in her constituency. Horse fly grazing is a huge problem and there are many unwanted horses.

Dominic Raab MP spoke on the unjustified cruelty of bull fighting and a much needed call to end bull fighting subsidies. Most people are unaware that Spains bull fighting industry receives public funding under the EU”s Common Agricultural policy. Breeders of fighting bulls receive around £ 100 million in EU subsidies each year,with around £ 13.5 million coming from British tax payers. He spoke on the suffering that bulls endure even before a fight simply for recreational entertainment in the bull ring.

Lorraine Platt called for the party leadership to commit to provide a close season for hares as soon as possible as hare numbers have declined by an estimated 80% in the last one hundred years. She continued to talk on the need to leave out any pledge to undermine the hunting ban in the new manifesto and how Blue Fox had been contacted by many Conservative supporters of their concerns of voting for the party because of this issue in 2010. Lorraine also asked for plans to roll out the badger cull to be abandoned and also omitted from the new manifesto. She  warned that there could be a backlash from Middle England voters who do not support badger culling. She called for the Party leadership to implement Wale’s example of annual testing without badger culling.

Peter Egan made a passionate plea for compassion and empathy  for all sentient beings and of his commitment to a meat free diet. He advocated how everyone could consider their consumption of meat. Peter referred to Paul Mc Cartney’s Meat Free Mondays campaign. He quoted a moving poem on a dying horse on the War battlefield and of the need to recognise that animals feel pain and suffering too at the slaughterhouse. Peter talked of the valuable work that Animal Asia carries out to rescue bears from bear bile farms and of the cruelty of the dog meat trade.

Questions from the audience included the importance of animal welfare education, the badger cull and the management of bovine TB, live animal transports, ritual slaughter, shooting, hares, horse welfare, snaring and global wildlife poaching. The fringe event was very well attended and we were pleased that we helped to provide a visible platform on the important issue of animal welfare at the Conservative party Conference.

Thank you to Dominic Dyer, CEO of the Badger Trust for his support at the event and for his contributions on why the badger cull should be stopped.

Lorraine Platt, Co Founder of Blue Fox, speech below  calling for any pledges to undermine the hunt ban to be excluded from the 2015 manifesto:

Hello my name is Lorraine Platt and I am the co-founder of Conservatives Against Fox Hunting (also known as Blue Fox) which was launched in 2010. Our 3 campaigns include supporting the ban on hunting with hounds, campaigning against the badger cull ( Blue Badger) and  we initiated the campaign in the House of Commons for a close season for hares( Blue Hare)  We provide support and wildlife information resources to Conservative MP’s and have also held parliamentary events for anti-hunting Conservative MPs . We have six Conservative MP Patrons.

As we head towards the election in a few months time, political parties throughout the UK are finalising their party manifesto. Of course, key areas such as the economy, education and health will be there – but we believe that issues concerning animal welfare should also be included, and we are working hard within the Conservative party to ensure the MPs know that animals matter to people.

It is essential that politicians become aware of the fact that voters find animal welfare important. It is necessary to ask politicians to formulate clear positions about animal welfare matters. We do this by constantly asking them for their stance, and continuing to stimulate the social debate on animal welfare.

“We now also have a pristine opportunity to dump the worn out hunting issue and promote a modern manifesto, in a new direction with a commitment to positive animal welfare objectives which appeal to our mainstream society. The “worn-out” issue of hunting  with dogs should be dumped by the Conservative leadership in favour of a “modern manifesto” for mainstream society,

A survey by Ipsos-MORI for the League Against Cruel Sports released late last year showed 80 per cent of the public were in favour of keeping fox hunting with dogs illegal – as well as other activities such as hare-coursing and badger baiting. “The survey also revealed there to be no difference in the view held by those living in rural areas versus those in urban areas on the issue of legalising fox hunting. This is not a town-versus-country issue

We have been contacted by many Conservative supporters who have told us that they had been alarmed by the Conservative leaderships support for a free vote to repeal the hunting Act 2004.  Some supporters said that they were unable to vote at the last General Election due to the toxic issue.  When we were canvassing and talking to people on the doorstep in 2009 people would say that they did not like the party leaderships support for the repeal of the hunting ban. At our local Open primary in Surrey in 2009, one of the largest in the UK, many questions were sent by post from residents of their concern on the ban being overturned.

We can understand that the party leadership may be tense about the hunting lobby’s huge disappointment that the ban will remain in place, yet it is necessary that the Conservative Party distances itself away from the toxic issue of fox hunting. For too long, the party has sided with the hunting lobby rather than representing the majority opinion on this issue. It is far more worthwhile to focus instead on pressing ahead with engaging the general public with progressive issues promoting animal welfare instead.

To conclude my talk, I want to stress that it is important that animal welfare must be championed within every political party. In fact it is vital that it is, as Animals Matter to people. We encourage people to Contact their MPs and candidates to ask them about their standpoints on animal welfare issues.

The more voters show an interest in political standpoints about animal welfare, the more politicians will have to take a stand on it.

Going forwards, we need to put animals on the agenda for the election if we are to see a positive change in the way that animals are treated.

Thank you very much for your attention.