Dom Raab, Minister of Justice on why he will not vote to weaken the hunt ban ( our Blue Fox patron)

This blog was written the day before the Vote was cancelled

The Debate on Fox Hunting by Dominic Raab MP, Minister of 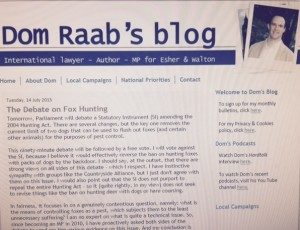 Tomorrow, Parliament will debate a Statutory Instrument (SI) amending the 2004 Hunting Act. There are several changes, but the key one removes the current limit of two dogs that can be used to flush out foxes (and certain other animals) for the purposes of pest control.

This ninety-minute debate will be followed by a free vote. I will vote against the SI, because I believe it would effectively reverse the ban on hunting foxes with packs of dogs by the backdoor. I should say, at the outset, that there are strong views on all sides of this debate – which I respect. I have instinctive sympathy with groups like the Countryside Alliance, but I just don’t agree with them on this issue. I would also point out that the SI does not purport to repeal the entire Hunting Act – so it (quite rightly, in my view) does not seek to revise things like the ban on hunting deer with dogs or hare coursing.

In fairness, it focuses in on a genuinely contentious question, namely: what is the means of controlling foxes as a pest, which subjects them to the least unnecessary suffering? I am no expert on what is quite a technical issue. So, since becoming an MP in 2010, I have proactively asked both sides of the debate to send me the various evidence on this issue. And my conclusion is based on an honest assessment of the evidence I have looked at.

It is clear that hunting foxes with dogs causes acute suffering to the fox. There is reasonable debate around other ways to effectively control foxes – by snares, shooting or other means. One aspect of the current debate has focused on whether shooting foxes might be both less effective and cause more suffering, because farmers and gamekeepers pursuing the fox cannot always kill it cleanly – which risks leaving a wounded animal to escape and/or die slowly under even worse conditions than being hunted by a pack of dogs. This is particularly germane to hilly terrain, where shooting can be less reliable.

Having looked again at this point, I have to say that I am not convinced that hunting foxes with a pack of dogs is substantially more effective or inflicts less suffering on the fox than shooting. The evidence – including the often cited study by the Federation of Welsh Farmers Packs – does not, in my view, bear this conclusion out. When the Department for the Environment and Rural Affairs assessed that study in 2013, they were similarly unconvinced.

Equally, if the aim of the SI were really to make fox control more effective and more humane, why not propose raising the cap on the number of dogs that can be deployed to, say, ten rather than removing it altogether? I have had numerous conversations on all of these aspects over the last couple of months. In reality, the aim of the SI – which many of its supporters candidly concede – is to return to hunting foxes with packs of dogs as sport, rather than for pest control purposes. And I can’t vote for that.