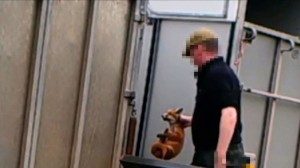 Fox Cubs Filmed ‘Being Fed To Hounds In Kennels’

Activists claim the video shows evidence of “cubbing”, the practice of using cubs to train hounds to hunt and kill foxes.

Footage has emerged which appears to show fox cubs being put into the kennels of hounds allegedly to train them to hunt and kill the animals.

Filmed by the Hunt Investigation Team supported by the League Against Cruel Sports, an individual can be seen carrying a fox cub into a barn where hounds are kennelled and barking, and later disposing of a dead fox in a wheelie bin before another is taken in.

Animal rights campaigners claim the video is evidence of “cubbing”, the practice of using cubs to train hounds to hunt and kill foxes.

Three people have been arrested and released on police bail – and an independent investigation has been launched into the South Herefordshire Hunt.

Hunting foxes with packs of hounds has been banned since 2004, with hunts now allowed to participate in “drag hunting” where an artificial scent is laid for the hounds to track.

The Master of Fox Hounds Association, which regulates and represents hunts around the country, said it had launched the inquiry “into conduct which suggests breaches of the association’s rules”.

It said two members of staff had been suspended and the kennels were currently closed.

“The South Herefordshire hounds are being looked after by other hunts which are members of the association,” it added.

Chief executive of the League Against Cruel Sports, Eduardo Goncalves, said: “The hounds won’t naturally kill foxes so they must be taught to do so and this footage exposes the gruesome training secrets of hunts in the UK.”

Secret footage has been released which appears to show live fox cubs being delivered to the kennels of the South Herefordshire Hunt before being thrown to the pack of fox hounds. The lifeless body of a cub is then seen to be dumped into a wheelie bin, before another is taken to meet the same fate.

Independent group, the Hunt Investigation Team, supported by the League Against Cruel Sports, filmed the horrific scenes, and say the footage is damning evidence of the reality of fox hunting and is not an isolated incident. The footage has been released as part of a major ongoing League investigation into ‘cubbing’2, the secretive illegal practice of training young inexperienced hounds to hunt and kill fox cubs.

League intelligence reveals that fox cubs not killed during these hunts are sometimes captured and kept to be used as live training bait for the hounds, like in this horrifying case, or taken to artificial earths3 to provide a ready supply of foxes for the hounds to hunt in the coming season.

The footage taken at the South Herefordshire Hunt kennels follows an earlier League investigation, which led to the rescue of a fox being held by the Belvoir Hunt and the subsequent brutal alleged assault by Belvoir Hunt supporters on two of the charity’s undercover investigators in retaliation, leaving one with a broken neck.

“This is the ugly and vicious truth behind the glossy image portrayed by hunts. What we believe this footage clearly shows is that cubs have been ripped away from their families, kept captive and then callously thrown alive to the hounds to rip apart. The horror and the suffering these cubs must have gone through is almost unbearable to think about.

“Hunts want us to believe that fox hunting is a sport but I can’t start to get my head round how this is sporting. What they are doing here is training the dogs to kill foxes, as simple as that and unfortunately this is not an isolated incident as this barbaric practice is happening across the country. The hounds won’t naturally kill foxes so they must be taught to do so and this footage exposes the gruesome training secrets of hunts in the UK.

“We know this happens every year during the ‘cubbing season’, when young foxes are surrounded by the hunt and the dogs sent in to kill them,  but to catch this despicable activity on camera at a hunt kennel is almost impossible.

“With this evidence in front of them, we hope those administering the law, and the people of the UK, accept once and for all that there is no justification for the cruelty that seeps through every aspect of fox hunting.”

Two people from Hereford and a further individual from Abergavenny have been arrested on suspicion of animal cruelty in connection with the incident shown in the footage.at the South Herefordshire Hunt kennels. All three individuals have been released on police bail.

“The Hunt Investigation Team, acting on intelligence, placed sophisticated surveillance equipment around The South Herefordshire Hunt kennels. Once concluded, the evidence was given to West Mercia Police. Investigators also removed the bodies of two fox cubs from the site and handed these to the RSPCA to conduct post mortems.

“The Hunt Investigation Team does not consider this to be an isolated incident and are monitoring other hunts.”

The incident at the South Herefordshire Hunt kennels is not the only time hunts have been caught capturing foxes for their own ‘use’:

“Once again we see evidence which destroys the deliberate deception of hunting as a means of fox control. Fox hunts hunt foxes because they like hunting foxes, not for any other reason. As we have seen time and time again, they will capture foxes,  release them on hunt days just to make sure hunters get their gruesome chase, or as we believe this footage shows, throw them to the hounds as bait. There’s nothing sporting, nothing natural and nothing remotely honourable about this so-called tradition. It’s grimy, it’s cruel, it’s going to be offensive to most right-minded people, and we need the police and courts to punish all those involved.”

1 The footage is available to view here:https://youtu.be/pHtc78NNMYs