Seasons Greetings and our year in 2012 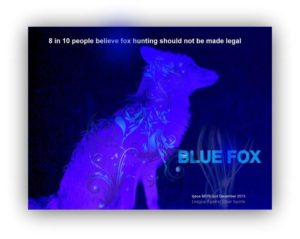 Thanks so much for all your wonderful support this year.

We have been busy with our three wildlife campaigns throughout 2012. We have attended meetings and had individual conversations with politicians including the Prime Minister and Cabinet members to introduce our campaigns.

Some MPs have featured us on their websites, follow our twitter account and have retweeted our tweets on animal welfare issues. Some MPs have worn the Blue Fox pin at the Conservative party conference and in the House of Commons!

We were often to be seen in Westminister attending Associate Parliamentary Group For Animal Welfare meetings, Environmental Wildlife Crime Audit meetings,  reception events and briefings to MPs to help advance animal welfare objectives.We presented our own talk with Humane Society International UK on a close season for hares before MPs at the Associate Parliamentary Group For Animal Welfare in the House of Commons in February. Our campaign for a close season for hares was included in the parliamentary ‘House’ magazine in an article written by Adrian Sanders MP.

In February ,we were  also featured on ITV and BBC news along with MPs, supportive animal welfare organisations and Bill Oddie speaking out against the badger cull in Parliament Square.

Conservatives Against Fox Hunting organised and jointly hosted with Humane Society International UK, the first ever hare protection reception for nursing hares in the House Of Commons in June this year. 3 cross party MPs kindly hosted the event for us and 14 MPs attended the event. Over 144 MPs supported the EDM 2531 for a close season for hares.

We have also been reported in national and local newpapers this year including, the Sunday Express, The Guardian, The Independent, The Daily Mail, The Big Issue, Resurgence magazine, ‘Protect’ magazine by the League Against Cruel Sports and ‘Wild Times’ by Care For the Wild International and Politics. Co.UK website.

We gave a talk before leading animal welfare charity representatives on Animal Behaviour and Campaigning organised by Learning About Animals and the event was sponsored by the Donkey Sanctuary. We have spoken about our campaigns on live radio and the Matthew Wright show on channel 5 tv.

Our Co founder was awarded the International Fund For Animal Welfare’s Campaigner Winner 2012 award which was presented at a reception in the House of Lords in October by Baroness Gale and Brian May of Queen. Bill Oddie, MPs and peers were also amongst the guests.

It has been an active year, and we have many plans for 2013!

We are all volunteers who share the passion to help make a difference to advance animal welfare issues.Thank you for your valued support

Have a happy Christmas and Happy New Year!

The Conservatives Against Fox Hunting Team.