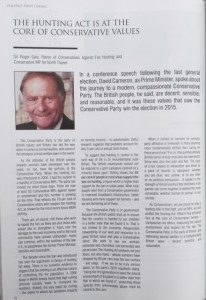 The Hunting Act Is At The Core Of Conservative Values

In a conference speech following the last general election, David Cameron, as Prime Minister, spoke about the journey to a modern, compassionate Conservative Party. The British people, he said, are decent, sensible, and reasonable, and it was those values that saw the Conservative Party win the election in 2015.

The Conservative Party is the party of British values and Britain has led the way when it comes to animal welfare with some of the strongest animal welfare laws in the world.

There are, of course, still those who wish to repeal the Act as there are also those who would like to strengthen it. Fears over the damage to the rural economy and to the rural community have proved unfounded. Hunts can continue, within the confines of the law. It is, to paraphrase the former Prime Minister, sensible and reasonable.

The decade since the ban was introduced has seen the arguments in favour of hunting fall away. There is no scientific evidence to suggest that fox hunting is an effective means of controlling the fox population. A 2006 study in Welsh forests found that high culling pressure actually leads to increased fox numbers. Indeed, the very basis for culling – the extent to which fox predation impacts on farming income – is questionable. Defra research suggests that predators account for only 5% of annual lamb losses.

To suggest that hunting is central to the rural way of life is to misunderstand rural Britain. The British countryside should not be reduced to a grim caricature centred on a minority blood sport. Polling shows that 84% of people in rural areas support the ban on hunting, a figure which is higher than support for the ban in urban areas. What rural people want from a Conservative government is improved broadband infrastructure, better housing, more support for farmers, and we are delivering all of those.

The Conservative Party is in government because the British public trust us to ensure that the country is handed to our children in a better state than we found it in. This is not limited to the economy. Responsible stewardship of our land and resources is a great British value and also a Conservative value. We want to see our animals protected and cherished, not tormented and persecuted. The Hunting Act protects not just foxes, but also hares, whose numbers from dropped by 80% over the last century, and stags. If we are to be truly serious about, as the party’s 2015 manifesto states, “being the first generation to leave the natural environment of England in a better state than that in which we found it”, protecting these species from unnecessary abuse must be central to that aim.

When it comes to concern for animals, party affiliation is irrelevant. Is there anything more fundamentally British than caring for those around you? For us, that quintessentially British sense of duty must also be extended to those who also feel pain and fear. The sight of a fox chased to exhaustion and killed by a pack of hounds, is repugnant whether you are blue, red, yellow, or of any other or no political persuasion. It speaks to the strength of British politics that members of all parties can come together to defend the most vulnerable,whether human or animal, in our society.

As Conservatives, we are proud to play a leading role in that fight, and as MPs, we will protect the Hunting Act. What it has achieved lies at the core of Conservative beliefs – compassion for others, treasuring the natural environment, and respect for the law. The Conservative Party is the party of Britain, and defending animal welfare is a fundamentally British value – decent, sensible, and reasonable.

Patron of Conservatives Against Fox Hunting