Sir Roger Gale, President of Conservative Animal Welfare thanks everyone for support to protect hunt ban (our Blue Fox patron) 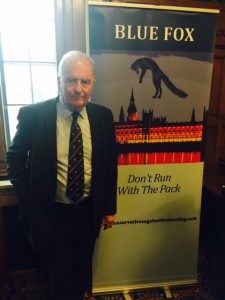 Foxhunting – The next moves?

North Thanet`s MP, Sir Roger Gale, Patron of Blue Fox and President of Conservative Animal Welfare has said, following the withdrawal of the Government`s proposed amendments to the Hunting Act:

“First, Blue Fox and CAW would like to thank all of those who have offered such tremendous support for the campaign to leave the hunting of wild animals where it ought to be – in the dustbin of history. We have, as a result, achieved the pledged backing of some fifty Conservative Members of Parliament – getting on for ten times the number in the last parliament – and I believe that even without the late entry of the SNP into the equation we would have carried the day on a genuinely free vote of the House of Commons. The House of Lords would also almost certainly have killed off the Statutory Instrument that was the vehicle for the proposed changes.

It now remains to be seen whether the Government will seek to re-introduce the amendments, whether the Tory manifesto commitment to a free vote on the repeal of the Hunting Act will be given government time or whether the proposals will be quietly dropped on the correct understanding that there is neither public support nor a parliamentary majority for a cause that most believe has already taken up far too much parliamentary attention and that has largely been resolved.

What is certain is that I and many of my Conservative colleagues in The House stand ready to make common cause with all of those who wish to ensure that foxhunting and hare coursing and stag hunting with dogs remain unlawful. Over ten years the Hunting Act has made a significant difference and I think that it is because of that, and because of the recognition that the dire predictions of the pro-hunt lobby have not been realised, that parliamentary attitudes have changed. This is a “sport” that, like cock-fighting and bear-baiting has had its day. It is time to move on”