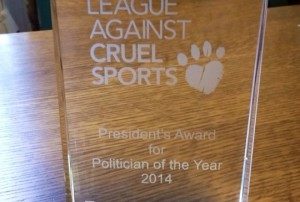 We are delighted that our Blue Fox Patron Tracey Crouch MP has been awarded a prestigious ‘Politician of the Year 2014 Award’ by The League Against Cruel Sports who we have held three joint animal welfare events with since 2010. A fourth joint event is planned for the Autumn of 2014.

Tracey  said she was delighted to receive the League Against Cruel Sports President’s Politician of the Year 2014 Award. Tracey is a keen campaigner on improved animal welfare standards, most recently campaigning against the Badger Cull, the banning of snares, banning the use of wild animals in circuses and the tackling of puppy trafficking and farming to name but a few.Tracey said “I am honoured to be thought of for this award by such an important charity working in this area. I believe animal welfare is an issue that is close to the hearts of many of my constituents and I will continue to do all I can to campaign on see improvements brought forward at both local and national levels. A huge thank you to the League for all their support on this work.”

Congratulations to Tracey Crouch MP and for all her support for animal welfare, including her stance against a return of hunting with dogs and against the badger cull.