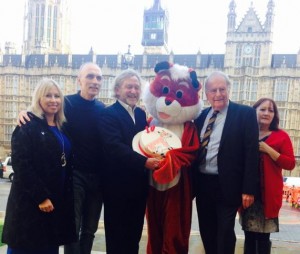 It is 20 years since the RSPCA, the League Against Cruel Sports and the International Fund for Animal Welfare (IFAW) began campaigning together for an end to the barbaric and outdated pastime of hunting with hounds.

That campaigning was successful with the introduction of the Hunting Act 2004, which has now been in force for nine years.

A reception was held at the House of Commons last night (Tuesday 11 February) and hosted by Chris Williamson MP to mark the ninth anniversary of the Act coming into force.

The charities continue to urge MPs to stand firm and protect animal welfare as we celebrate the success of the Hunting Act for many more years.

The Hunting Act prohibited the hunting of wild mammals, including foxes, deer, hares and mink with dogs, something which the vast majority of the British public opposed and continue to oppose.

Since the Act came into force it has quickly established itself as the most successful piece of wild animal legislation ever passed. On average one person every week is prosecuted under its provisions. Of these over two-thirds are found guilty, rendering the arguments that the ban is not enforceable, redundant.

David Bowles, RSPCA head of public affairs, said: “In common with the majority of the British people, we believe that any repeal of the Hunting Act would be a backward step for a civilized society.

“Despite scare stories by pro-hunting lobbyists who wanted to continue this barbaric sport, the ban did not affect countryside employment, cause a growth in the fox population, nor result in the loss of horses or hounds. In fact, many hunts still meet but use artificial scents to trail hunt – something which doesn’t result in the needless deaths of wild animals and is something we welcome.

“Hunting animals for sport has no place in modern society. We will remain alert to those who attempt to break the law and will investigate such allegations where they are reported to us in the same way as we would any other allegations of crimes against animal welfare.”

Rachel Newman, Deputy Chief Executive of the League Against Cruel Sports, said: “After 80 years of tireless campaigning it was a landmark moment for animal welfare when the Hunting Act came into force. Nine years later, polling shows the majority of MP’s and the general public, rural and urban don’t want to see a return to hunting for sport. Hunters should concede defeat, give up their forlorn hope of repeal and adapt to this new world.”

Robbie Marsland, Director IFAW UK said: “Encouraging a pack of hounds to chase and tear apart a mammal was made illegal nine years ago. IFAW is proud to have been an important part of this vital campaign. We continue to monitor the successful enforcement of this law and we look forward to the rest of the 21st Century being free from this barbaric, so called, sport.”

Myth: It’s only city dwellers who oppose hunting, if they lived in the country they’d understand

Fact: Polling consistently shows that the chasmic divide between urban and rural dwellers is pure conjecture. The 2013 survey, carried out by Ipsos MORI showed no difference in the view held by those living in rural areas versus those in urban areas on the issue of legalising fox hunting with 80% of the opinion that fox hunting should not be made legal. This is not a town versus country issue.

Myth: Hunting is essential to control the fox population

Myth: The Hunting Act is unenforceable

Fact: The CPS, League Against Cruel Sports and the RSPCA have prosecuted more than 280 defendants who were found guilty of offences under the Hunting Act since it came into force (an overall conviction rate of 69%³). Furthermore, the number of prosecutions under the Hunting Act compares favourably with other wildlife legislation aimed at protecting animals.

The results have been weighted to reflect the known profile of the adult population.

Results are based on all respondents unless otherwise stated.

We asked the following question:

Question: Now a question about sports where animals are set on other animals to fight or kill them. These activities are currently illegal in the United Kingdom.

SHOWCARD A – For each one I read out, please tell me whether you think it should or should not be made legal again. Just read out the letter that applies in each case.

o Yes, should be made legal again

o No, should not be made legal again

Thank you to our three Blue Fox Patrons, for supporting the celebration event and to Caroline Dinenage MP for kindly including Blue Fox’s work in her speech before the audience.It was great to see cross party MP’s coming together to celebrate the ninth anniversary of the iconic Hunting Act 2004 which bans hunting with dogs for sport.