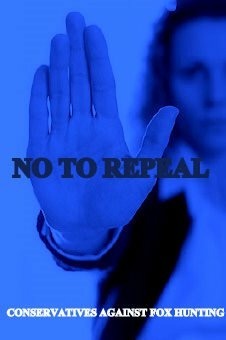 We hear all too often that “townies don’t understand how rural matters work” from a minority of people who support the return of hunting with dogs.

Hunting with dogs is considered nasty by the majority of people in this country, and poll after poll demonstrates that the majority of the public think it should remain banned, writes Lorraine Platt

Let’s have some common sense here about the hunting with dogs issue. It is tiresome to constantly hear from those who support the return of hunting that the Hunting Act 2004 is a “thoroughly nasty little bit of Labour legislation”.

Well, hunting with dogs is considered nasty by the majority of people in this country, and poll after poll demonstrates that the majority of the public think it should remain banned.

In 2010, along with a chair of the Conservative Association, I co-founded Conservatives Against Fox Hunting – also known as Blue Fox – to dispel the myth that all Conservatives support repeal. We have held events in Parliament for anti-hunting Conservative MPs and fringe events at party conferences with MP speakers. We have been thanked by anti-hunting MPs for providing information resources, support for their stance against repeal and uniting them at events.

We hear all sorts of excuses and silly justifications for hunting to return, such as fox hunting assures a strong and healthy fox population as well as weeding out the old and sick foxes (which is at odds with the now illegal practice of cub hunting, which targeted killing healthy young fox cubs still in their litters).

The fox is a wild member of the dog family. The banned “sports” of dog fighting and badger baiting involve the same characteristics of setting dogs onto animals for the pleasure of a minority of people.

If some politicians refuse to listen to the majority of the public on this issue, maybe they will listen to why farmers speak out against fox hunting on their land.

Farmers have contacted us to tell us of the chaos and disruption an unwanted hunt has had on their land, as it risks miscarriages among distressed livestock and causes damage to fences.

Farmers have also said how foxes have provided an economic benefit to them, killing rats on their farms and eating rabbits.

We have taken sheep farmers who support the Hunting Act 2004 into the House of Commons to meet MPs and express their concern over the return of hunting with dogs.

One sheep farmer wrote an article for our website and said: “Perhaps the least convincing of the hunt lobby’s poses is that of friends of the environment and representatives of country folk. My local hunt is 80 per cent wealthy city people. Very few of the local farmers join in.”

One of our team of volunteers, Christine Elmer, is a councillor, grew up on a dairy farm in a rural area and worked with Defra for 24 years. She is active in speaking out against hunting with dogs and disagrees with farming writer Peter Hall’s recent comment that “the anti-brigade, the bleeding heart townies, don’t understand how matters rural should work.”

She said: “It is the most patronising and condescending remark to make about people all over the county who do care, and deeply, about what happens to our farming communities, our livestock and our wildlife.

“The fact Peter Hall seeks to make these comments at a time like this, which he must know will increase friction on both sides, only serves to emphasise that people like him are losing the media battle for hearts and minds.”

One chair of Conservative Future recently wrote to us in a personal capacity about fox hunting and said: “Being born in Carlisle and growing up in Penrith in Cumbria, the British countryside has always been an important part of my life.

“Opponents of fox hunting and the badger cull are often stereotyped as city dwellers with no understanding of living in and around badgers, foxes or our proud traditional country lifestyles.

“The truth is I do understand this, I have grown up taking great pride in our farming history, our villages and towns that make places like Cumbria beautiful places to live and visit, and our wildlife. Those are what I think of as things worth protecting – not 18th century sports of chasing animals.”

Any change to “ease restrictions on the hunting ban legislation” would be an attempt at repeal by the back door, as the pro-hunting lobby know they can’t get a majority to repeal the Hunting Act because there is an increasing number of MPs who represent the public’s view on this issue and will not support the repeal of the ban on hunting with dogs.