Sir Roger Gale, MP for North Thanet and Patron of Blue Fox said,’ Fox hunting has had its day”, 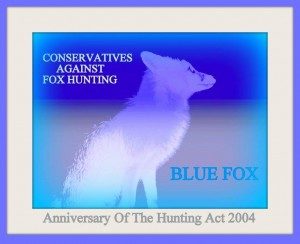 The latest Ipsos-Mori (December 2015) poll for the League Against Cruel Sports on the issue shows that 83% of the country think fox hunting should not be made legal again- that’s eight out of ten people want to keep the ban. The same poll shows that the opposition to hunting with dogs is higher in rural communities than it in urban communities.

It’s time to leave the worn out hunting issue behind and promote commitment to advance positive animal welfare objectives which appeal to our whole society. Calls for the repeal or amendments to weaken the hunting ban perpetuate a dated outmoded image. We need to move forward as a nation, not backwards on matters of animal welfare. There are an increasing number of Conservative MPs who are prepared to resist repeal and say “ No” to a return of banned sports.”