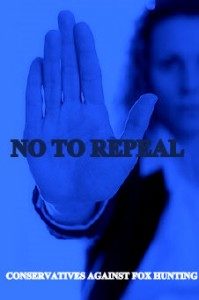 The repeal issue is toxic and misrepresents the mainstream Conservative supporter as well as alienating the new generation of voters.  It cements the opposition argument that there is a perception we are ‘for the few and not the many’ and it has the potential to show us as a party that does not listen not only to its supporters but the country. We must look forwards  and not backwards and we must question why time and time again the party leadership listens to the small pressure group of hunt lobbyists.

To understand this perhaps we should look at how the hunting lobby has operated in the past. On the 5th of July 2016, following David Cameron’s resignation as party leader and at the beginning of the Conservative Party election campaign for a new leader, Simon Hart MP, present Chairman of the Countryside Alliance, wrote an article for the Spectator Magazine, ‘How the rural vote could decide the Conservative leadership race’.(https://blogs.spectator.co.uk/2016/07/rural-vote-decide-conservative-leadership-race/). In the article, he claims their own research suggests there are at least  26,000 Countryside Alliance members who are also members of the Conservative Party – if this is the case- that is 20 percent of members who have a voting right to decide a new leader of the party. In the article, he asks a series of questions of potential leadership candidates including: ‘Can you confirm that you are opposed to the Hunting Act and that a commitment to resolve this injustice will remain in any future manifesto?’

It is interesting to note that the Telegraph reported on the 27th January 2001 “The RSPCA won its High Court battle yesterday to stop pro-hunt campaigners from infiltrating its ranks.” (http://www.telegraph.co.uk/news/uknews/1319660/RSPCA-wins-right-to-block-hunt-lobby.html ). The Independent reported on the 19th of June 1999 , Fox hunters plan to hijack RSPCA’s annual meeting (http://www.independent.co.uk/news/fox-hunters-plot-to-hijack-rspcas-annual-meeting-1101217.html)

If rural votes were truly going to decide the Conservative Party leadership race or for that matter a general election then surely an anti-hunting candidate would win, as poll after poll reflects overwhelming public opposition to Hunting with dogs. This is opposed in equal measure in both the rural and urban areas. Latest polls show a staggering 84 % of rural voters oppose the repeal of the act.

We must now move on from the toxic repeal issue within our party. This will only be achieved by either the party itself looking at the voting effect this has or by grass root Conservative party supporters themselves.

If you are a Conservative supporter whose views reflect that of the anti-hunting majority alongside your other Conservative held opinions and you want to help keep hunting with dogs banned you must take action and join the party to help make a difference. It is necessary to become a voting member and have influence in the political party you support.

Each and every anti-hunting Conservative supporter has to take individual responsibility to end the strangle hold that the divisive repeal issue has held over our party. There is nothing contradictory about being a Conservative who cares about animal welfare. Join the Conservative Party and become a voting member here:

Remember; the pro-hunt lobby in their own words:

Acknowledge ‘hunting is a sport’

“never given up fighting for our sport”

Chairman of The Council of Hunting Associations
May 2017

“nor does she want to tear apart a live fox – that’s the job of the hounds,”

Consultant to the Countryside Alliance, Council of Hunting Associations and the All Party Parliamentary Middle Way Group
ConservativeHome – 3 June 2017

“The Alliance has a wide agenda but field sports will remain its backbone, and repeal of the Hunting Act is a key objective.”