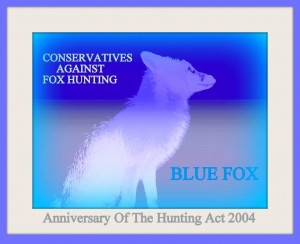 We celebrate the anniversary of the Hunting Act 2004 on February 18th. The country is in the worst economic recession for decades and it is deeply regrettable that the Coalition leadership continue to offer a free vote on repealing the ban on hunting with dogs.

Poll after poll demonstrates that the majority of the public support the ban. Is it appropriate to use valuable parliamentary time to repeal this legislation when MP’s should be focusing on political priorities of employment, education and health etc concerns? How will repealing the ban on hunting with dogs help people’s families in these difficult economic times?

The Coalition leadership should be focusing on policies to help the nation out of recession and cease inviting criticism for offering a free vote to repeal legislation set in place to protect wildlife from outmoded sports.The extraordinary support for returning banned sports mainly amongst Conservative MP’s compromises the party’s image as being seen as out of touch with the majority of the public’s view on this issue.

We are pleased that traditional hunting with dogs has been banned for several years. Hunts are involved in drag hunting and trail hunting .Traditional Hunting is illegal and involves packs of people who chase and set packs of dogs onto hares, stags and foxes for sport.They are often compared to badger baiting mobs or dog fighting gangs as they all share the very same shameful practice of setting dogs onto animals for recreational sport. No chocolate box image of a uniformed traditional Hunt will ever mask this truth.