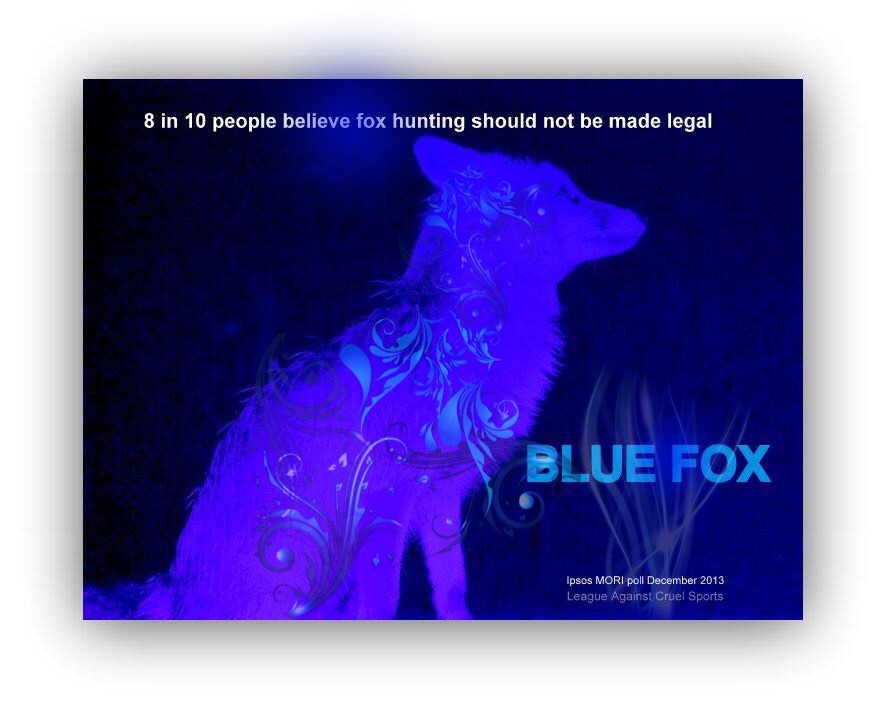 We are very grateful to the Chairwoman of Esher and Walton Conservative Association for her kind invitation to speak before the committee and guests at the lunch event on our wildlife protection campaigns.

Our Blue Fox Founder spoke before the guests for 10 minutes which included the Mayor of Elmbridge and the Conservative Leader of Elmbridge Council.

Read the speech to the Esher & Walton Conservative Womens Organisation on 8th November 2013:

I am delighted to be here before you to give a talk on how I founded the Blue Fox, Blue Badger and Blue Hare campaigns.

As with what happens with life sometimes, I did not set out intentionally to found three campaigns- they evolved.

It all started when my husband , who was Chair of our Esher and Walton Association at the time- he is the president now – and I came across talk of the party leadership’s support of a return of hunting with dogs, and it’s commitment to offer a free vote on the repeal of the hunting act 2004. Now we were very surprised to hear this in late 2009 and were quite taken back by it, as the ban not only bans fox hunting but stag hunting, hare hunting and hare coursing with dogs. We thought- who could possibly want a return of such sports which involve setting dogs onto wild animals for sport. We don’t support badger baiting or dog fighting which share the same characteristics of setting dogs onto animals for the recreation of a minority of people so why should we want a return of the same cruelty to stags, hares and foxes

When we were out canvassing  and handing out leaflets, people on their doorsteps would speak to us of their concerns about a return of hunting with dogs.

We built a simple website to say as Conservatives, lets keep hunting banned and not waste precious parliamentary time on a ban that the majority of the public support and get on with getting the economy on track etc. Well, the response to that basic website was astounding!

We received tons of emails from people expressing their relief that other Tories felt the same way about this issue. Some even said that they did not feel they could vote Conservative at this time as they were so concerned about the leadership’s support for repeal. Our mission is to dispel the myth that all Conservative supporters are pro hunting. Poll after poll has demonstrated that three quarters of the population want to see fox hunting remain illegal.

So from one basic homemade website, I then decided to take it further and set up the group for everyone who had emailed us to connect further on our Facebook site and twitter sites which have a combined following of over 3,000 followers , including MPs, Peers and Councillors, Association Chairs, agents, Conservative candidates , Associations and environment journalists all over the country. Our social media sites have a higher klout influence score, despite being run on a voluntary basis than the leading hunting lobby who have employed a full time campaigns team. Blue Fox activists are all volunteers who give up their time to speak out to protect wildlife.

We held the largest anti hunting parliamentary event in June 2013 which was very well attended by anti hunting Conservative MPs.

We are delighted to have four Conservative MPs as our patrons- Sir Roger Gale, the Chairman of Conservative Animal Welfare, Caroline Dinenage, Tracey Crouch and Mike Weatherley.

We are also members of the Associate Parliamentary Group For Animal Welfare in the House of Commons and Partnership For Action Against Wildlife crime PAW.

I am very proud to also be a Trustee of the League Against Cruel Sports, the leading charity campaigning against the cruel practices of hunting with dogs, bull fighting, dog fighting, snaring, shooting live animals for sport and trophy hunting.

In September 2012 I founded the Blue Badger campaign.We had been campaigning against the badger cull for some time under our Blue Fox campaign but it is a huge issue and needed its individual campaign.

Blue Badger is a founding member of Team Badger, the coalition of leading animal welfare charities and organisations against the government’s badger cull. They include the RSPCA, League Against cruel Sports, IFAW, The Badger trust, Care For The Wild International, HSI, Save Me, Born Free, Network For Animals and many more.

The government is culling badgers which are a protected species in a misguided attempt to try to control Bovine TB in cattle. badgers have lived here for hundreds of thousands of years. Some of their individual setts were established hundreds of years ago and once they are gone they are gone.

In 2012, over 30 leading scientists and wildlife disease experts signed a letter voicing their concerns against the badger cull calling the government’s badger cull’ mindless’. Famous conservationists such as Chris Packham, Simon King. our Bill here(!) and Sir David Attenborough have spoken out against the cull. Over 300,000 people signed a petition against the badger cull but the culls went ahead. It is frustrating that badger culling is taking place even right now in the West of England while over the border in Wales there is a 5 year vaccination programme for badgers. Vaccination is a much more humane and sensible solution and is the way forward.

We are very concerned that the Environment Minister Owen Paterson wants to roll out the badger culls across England. Very recently, 20 Conservative MPs signed a letter to Owen Paterson requesting scrutiny on the culls and asking for a debate before any roll out of the culls can take place. We urge people to contact their MPs and ask them to support vaccination initiatives rather than support further badger culls.

The pilot culls have been reported widely in the national newspapers as a complete failure even with the extensions and the huge policing costs involved meant that vaccination may be more cost effective, especially since so many badgers were cage trapped instead of being culled by free shooting. if the badgers were caged and shot then they could have been vaccinated instead. Culling badgers over such a prolonged period and failing to meet the required targets is likely to have worsened the TB situation at a huge cost. We have heard ludricous claims by the Minister Owen Paterson saying that’ Badgers are moving the goalposts’ to excuse the failure of the culls. But this is no laughing matter for badgers, they have become scapegoats and have suffered . We call for greater biosecurity on Farms, tighter cattle movement controls and vaccination for both cattle and badgers.

In 2011 I initiated the current drive in the House of Commons for a close season for hares. I was amazed to discover that hare populations have plummeted by an estimated 80% in the last 100 years from around 4 million to only about 750,000 hares today.  Changes in agricultural practices have contributed to their population decline but also despite hares being a priority’ species, around 390,000 hares are shot for sport each year, leaving around 37,000 leverets- baby hares to starve to death when their mothers are killed. It is extraordinary that hares are the only game species not to have a close season in England and Wales. Close seasons for hares exist in most of mainland Europe, Northern Ireland and Scotland introduced the important legislation last year.. I organised the very first ‘Hare protection’ reception in the House of commons last year which we held jointly with Humane Society international UK. It was well attended by MPs and Bill was there too! Care For the Wild International and the Hare preservation trust now work with us too to introduce legislation for a close season for hares.Over 145 cross party MPs signed the EDM calling for a close season for hares.

I will admit that wildlife protection lobbying is very challenging and demands strong resilience and determination. It is hugely demanding on the time front and requires constant focus, writing articles for national newspapers, doing BBC radio and TV live interviews with often only a few minutes notice and a commitment to social media to spread information several times a day. Thank goodness for smart phones- which enable emails and tweets to be sent any where any time on the move! It means carrying banners against the badger cull in city centres in the rain and wind at weekends- it really is walking the talk.

Do join our campaigns if you would like to help our campaigns for wildlife protection- we welcome volunteers as we are all volunteers ourselves. We always need people to email MPs for us, write or blog for us, help with our parliamentary events and more..It is very rewarding to help make a difference to protect wildlife and we would love to hear from you if you would like to get involved.

Please do remember to email and speak to your MP about the issues I have talked about today. MPs do often judge an issue by the size of their mailbags so do speak out for wildlife who have no voice of their own.

Thank you for your kind attention.