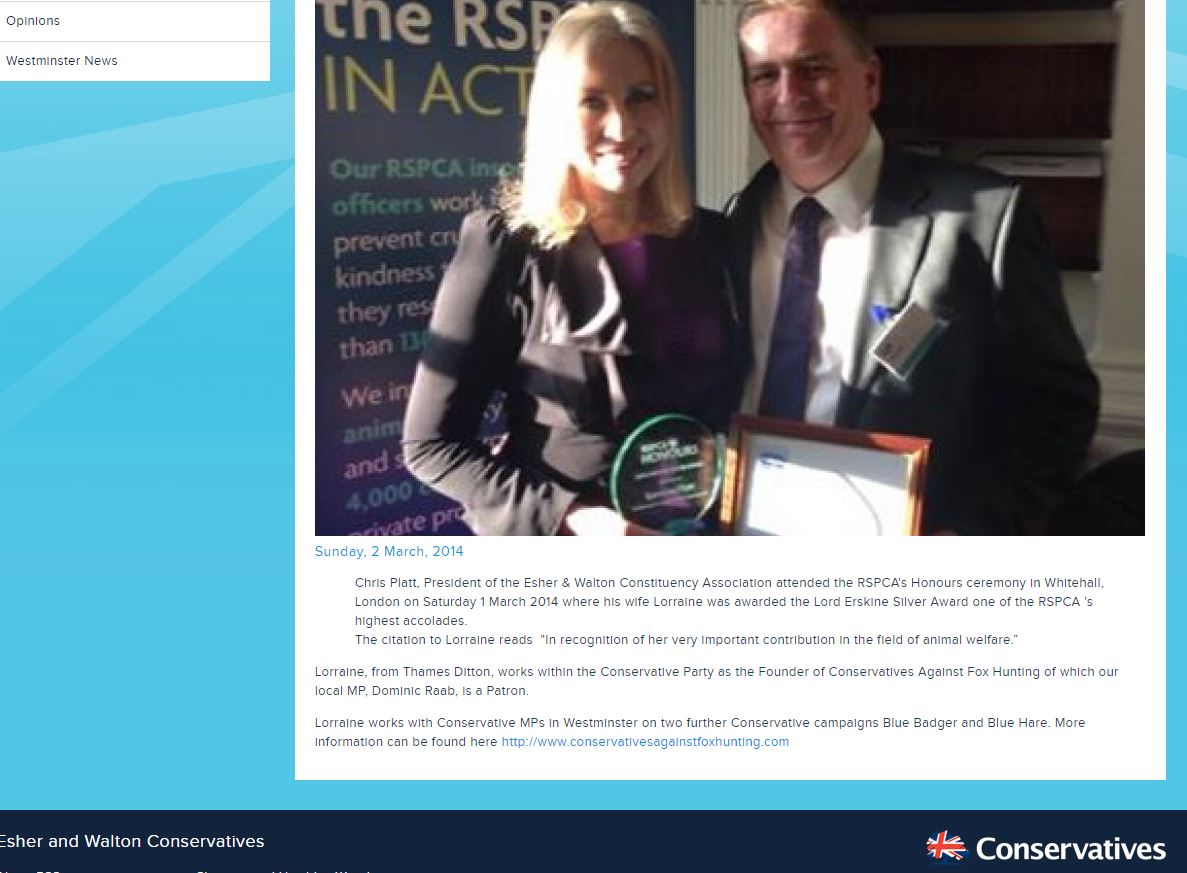 The RSPCA awarded one of its highest awards, the Lord Erskine Silver Award, to Lorraine Platt, Founder of three wildlife campaigns at a special ceremony  held at the RSPCA Honours celebration event in Whitehall on Saturday 1st March 2014

Lorraine has founded 3 voluntary wildlife protection campaigns, Blue Fox, also known as Conservatives Against Fox Hunting, Blue Badger against the badger culls and Blue Hare which campaigns for further hare protection legislation. She has organised several parliamentary events to advance animal welfare objectives which are well attended by MP’s in the House Of Commons. The Blue Fox Group has six Conservative MP Patrons.

On hearing of the award, Lorraine said’ I am deeply honoured to be awarded the Lord Erskine Award in recognition of my work as Founder of Conservatives Against Fox Hunting, also known as Blue Fox.I am very grateful to the RSPCA for honouring our work with this prestigious award. I also feel very thankful to my family, the wonderful Blue Fox team volunteers, our Blue Fox MPs, cross party MPs and our dear supporters who have made all our work possible and my gratitude goes out to them too.”

Lorraine received The International Fund For Animal Welfare Campaigner Winner Award in 2012 at an award ceremony in the House Of Lords and was a short listed Nominee for the Inspiration Awards For Women in 2013.

The RSPCA’s award is named after Lord Erskine (1750–1823) who pioneered the first anti-cruelty legislation in the United Kingdom. The Society for the Prevention of Cruelty to Animals (as it then was) was founded a year after his death in 1824.

The RSPCA  is the oldest and largest animal welfare charity in the world. It specialises in rescue, animal welfare and preventing animal cruelty.Learn more about the important work the RSPCA carries out on this link:  www.rspca.org.uk

A Conservative activist from Surrey  has won an RSPCA award for her wildlife campaigning.

A trustee of the League Against Cruel Sports, director of Conservatives Against Fox Hunting Lorraine was one of the co-founder of the Blue Fox – a group to provide a voice to Tory MPs who do not want to see the hard-fought hunting with dogs ban repealed.

Lorraine has been instrumental in setting up more Westminster campaigns – the Blue Hare to introduce a closed season for hares and the Blue Badger campaigning against the badger cull.

The RSPCA’s Chief Veterinary Officer Dr James Yeates, said: “Lorraine has made considerable contributions to the campaign in support of the Hunting Act 2004 which protects stags, hares and foxes from being hunted by dogs.

“The Blue Fox group represents Conservative supporters who think hunting with dogs should remain illegal. The group was established, in part, to dispel any myths that all Conservatives were pro-hunting and to give those Conservatives who are against the law being repealed, the chance to be heard.

Lorraine Platt said: “I am deeply honoured to be awarded the Lord Erskine silver award in recognition of my work as founder of The Conservatives Against Fox hunting, also know as Blue Fox.

“I am very grateful to the RSPCA for honouring our work with this prestigious award. It is encouraging to know that our work to protect the Hunting Act 2004 is recognised and appreciated.”

The RSPCA has been presenting awards for about 150 years. This year The Honours includes awards for special merit and ability amongst the charity’s inspectors; humanitarian awards for those who have made an outstanding contribution in the field of animal welfare; and awards for special investigations.

This year winners include:

Five Royal Marines and three members of the Cornwall Fire and Rescue Service presented with gallantry medals for saving the pony which had tumbled 80ft down a cliff in February last year 2013.

Two professors who have scooped a new award in memory of astronomer and honorary RSPCA vice president Sir Patrick Moore who sadly died in 2012.