Farmer speaks out against relaxation of Hunt ban. March 7th 2014 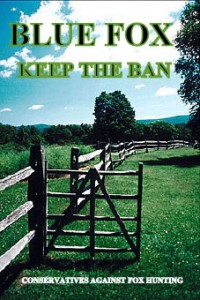 I gather that you/your department is angling to bring back hunting with dogs by the devious means of increasing the number of dogs allowed under the hunting act, which currently allows for 2 dogs.

I am a farmer in the Southwest – Mid Devon.

I have had and still hold interests in other businesses.

I have a healthy number of foxes which are not controlled in any way.

It is very simple and inexpensive to organise farming practice to avoid stock losses to foxes.

Foxes save me a great deal by controlling rabbits (reducing crop losses) and rats, they are more valuable to a farmer alive than dead.

There is no justifiable case for killing foxes.

Hunting is not a sport, it is plain and simple murder by cowards of creatures which cannot fight back.

When I was young I used to shoot but realised by my late teens (mid 1960s) that there was no competition and I had no moral right to destroy our natural heritage, creatures which belong to the nation.

Too many of our native species (flora and Fauna) have already been decimated – it’s time to stop the destruction.

I think that people who have a desire to kill for the sake of it need psychiatric help.

In common with approx. 80% of countryside people I am totally against the return of foxhunting in particular, a practice which has no value or place in a modern civilised society.

If hunting with dogs returns as a consequence of Conservative party action I will never vote Conservative again.

We receive many emails from Farmers who do not want to see a return of hunting or the relaxation of the ban. The above letter was sent to us in March 2014