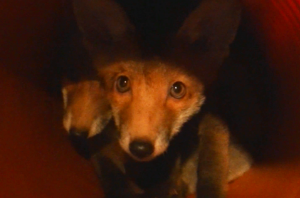 Press release by the League Against Cruel Sports:  Young foxes are being taken from the wild and kept in captivity so they can be hunted illegally, claims a charity, after an undercover investigation discovered 16 cubs in a barn linked to a high-profile hunt.

Covert video evidence taken by the League Against Cruel Sports reveals 16 fox cubs as young as three months incarcerated in a dark shed on land linked to the Middleton Foxhounds hunt, near Malton in North Yorkshire.

The video1, filmed as part of a League investigation in late May 2015, shows a shed fitted out to mimic a fox earth, and the cubs being visited by a Middleton Foxhounds employee2 to be fed on dead chickens and provided with dirty water in bowls. There were no vixens or adult foxes, which suggests the cubs were forcibly removed from their earths.

Dr Toni Shephard, Head of Policy and Research for the League Against Cruel Sports, said that the League had alerted the police who removed the foxes and arrested the hunt employee. The foxes, one of which died shortly after the rescue, are being kept at a secret location.

“This blows apart the argument that hunting is ‘wildlife management’. Why would people working for a hunt be keeping young foxes? The answer is simple but terrible – they capture foxes so there is always a ready supply of animals to be chased by the hunt. Put bluntly, these foxes were kidnapped for cruelty,” said Dr Shephard.

“We’re sure that there will be a denial that these captured foxes are linked to the local hunt, but the evidence is right there,” said Dr Shephard. “The other footage, the intelligence we have received and testimony from people who have been involved in hunts all show that raising foxes to be hunted was, and still is, a common practice among hunts.

“A vocal minority are trying to get the Hunting Act repealed, and one of their key arguments is that hunting with dogs is some form of ‘fox control’ service. Anyone seeing this footage can now see what a despicably false argument that is. Hunting with dogs is nothing to do with fox control. It is simply a cruel sport, nothing more – and now it is clear that it is even crueller than most people ever knew.”

• Intelligence reports to the League Against Cruel Sports’ investigators implicating more than 20 hunts in capturing foxes to be hunted in just the last 15 months.

• Other footage sent to the League’s Wildlife Crimewatch team of an artificial earth containing a young fox in the Northamptonshire/Leicestershire area, the fox being fed, then members of the hunt unblocking the earth so that the fox escapes just prior to the hounds running past.

• Further footage provided by the Hunt Saboteurs Association showing foxes 3 being fed by members of a hunt.

“We’ve known for a long time that this is a practice carried out by many hunts, but this is the first footage that graphically shows the scale of what they are doing, and links it directly to members of the hunt,” added Dr Shephard.

“This would be appalling enough even if hunting was still legal. But the fact is, all the intelligence and evidence we have put together over the last few months has pointed to this going on right now – while hunting is banned. This can only mean one thing – some hunts are routinely breaking the law, and they are doing it in a most disgusting manner by capturing and feeding the very foxes they are planning to chase and kill.”

Clifford Pellow, a kennelman and huntsman for 23 years and now retired, said:

“I’ve worked with many hunts across the country and seen foxes kept in milk churns, cages and sheds and encouraged to breed in artificial earths so there’s a ready supply to be hunted. I’ve even seen a fox deliberately strung up in a tree to send the hounds into a frenzy, so it’s no surprise to me this cruelty carries on.

“Though hunts insist they are there to provide a wildlife control service, the fact they break the Master of Foxhounds Association rules over and over again shows that this just isn’t the case. They’re still in it purely for the blood ‘sport’, with a nasty, cruel streak and no respect for the law.

“The hunting world’s last possible justification for repealing the Hunting Act has been well and truly blown out of the water.”

An investigation by the League discovered the foxes in the barn following a tip off. Covert surveillance was then placed on the shed and the footage of the terrierman going in was obtained.

Anyone with information about wildlife crime, including capturing foxes to be used for hunting, ‘artificial earths’, or ‘hunt havoc’ when hunts cause damage or chaos to members of the public, please contact the League against Cruel Sports’ Wildlife Crimewatch team on 01483 361 108 or online at www.league.org.uk/crimewatch.

• Briefing document can be downloaded here.

• 2 Middleton Foxhound employee: The man identified outside the barn was identified as the ‘terrierman’ for the Middleton Foxhounds. A terrierman accompanies a hunt and sends his terriers down into fox holes or badger setts to trap and fight with foxes after they have gone to ground following the hunt. This man was arrested when the foxes were removed by the police and is currently on bail.

• Registered as living at hunt kennels: The male in question is shown on the 2015 voters register at living at the hunt kennels, which are 200 metres away from the barn. The Middleton Foxhounds are registered as an incorporated non-limited business with a registered address of the kennels. (Incorporation date 1/1/2010). The company number is 4058254

• Land ownership: The land is owned by the Birdsall Estates Company. According to the current appointments report held by Companies House, Lord Middleton is secretary and joint director. Lord Middleton was a joint master of the Hunt from 2009 until 2013.

• 2013 court case: Four members of the Middleton Foxhounds, including the man identified above, pleaded guilty to hunting with hounds at a court case in 2013.

• Edward Duke, currently Joint Master of the Middleton Foxhounds, is a former Chief Executive of the Countryside Alliance. He is often reported as saying that banning “foxhunting” would not save the life of a single fox. He has said that ‘it is an inefficient way to control fox numbers’ and says that “we do it (foxhunting) for a bit of fun”.

• 3 Artificial earths: structures built and maintained by hunts to provide shelterand breeding places for foxes. Their sole purpose is to ensure a good supply of foxes ready for the hunting season. They are most often constructed with pipes buried underground, meeting at a central bedding chamber. The chambers are often elaborately built with brick or dry stone walls.

• The 10th Duke of Beaufort summed up their use, in his book Fox Hunting, published in 1980: In countries where earths are scarce it is sometimes found necessary to make artificial earths, to provide somewhere for local foxes to have their cubs; in other words, for breeding purposes. An additional advantage is that if an artificial earth is left open, it will only take a few minutes to bolt a fox. Also if it is a blank day, one knows where to go with some certainty of finding a fox.”

• For more information on artificial earths, refer to the League Against Cruel Sports report Hunts and Artificial Earths, published in 2011. At that time – seven years after the Hunting Act made hunting illegal – artificial earths with signs of recent maintenance or food supply were found in fourteen counties, on land hunted by twenty-one hunts.

• League Against Cruel Sports is a registered charity in England and Wales (no.1095234) and Scotland (SC045533) that brings together people who care about animals. Like the majority of the public, we believe that cruelty to animals in the name of sport has no place in modern society.