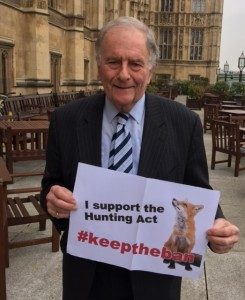 Foxhunting. Attempt to turn the clock back “out of Step with public wishes” MP

The President of Conservative Animal Welfare and Patron of Blue Fox, North Thanet`s MP Sir Roger Gale, has described as “completely out of step with the wishes of the majority of members of the public” an attempt to begin the repeal of the Hunting Act to be made by the Government on Wednesday.

Sir Roger, who has long campaigned and voted against the hunting of wild mammals with dogs has said:

“The hunting of wild animals with dogs has been consigned to the dustbin of history, along with cockfighting and bear-baiting, and the idea that this clock ought to be turned back is regressive and unpleasant. The suggestion that hunting is a way, or the only way, of controlling foxes is risible. In my own rural constituency we do not have a hunt and yet foxes are controlled perfectly well without tearing them to pieces in the name of “sport”.

Dire predictions that hundreds of horses and hounds would have to be destroyed if hunting animals in this way was banned have proved completely unfounded as have suggestions that hundreds of rural jobs would be lost and that the countryside would be returned to an unmanaged wilderness. In fact, more people are now riding and following drag hunts then ever followed hounds hunting foxes precisely because no animal is killed at the end of the chase.

It is time to recognise that, like other “traditional” pastimes, such as dog-fighting and public hangings, foxhunting has had its day.

Happily, there is a new breed of Conservative MP , representing rural and urban areas alike, that is more enlightened and that has the courage to stand up to those that rear foxes for the sole purpose of hunting them and to condemn what is a thinly-disguised attempt to reintroduce a pastime that is unacceptable in a civilised and compassionate society through the back door. In this we know that we have the support of the overwhelming majority of “hard working people” of all parties and I hope and expect that on a genuinely free vote and without behind-the-scenes pressure the measure will be defeated”.