Thank you to Lush Handmade Cosmetics for the Charity Pot support! 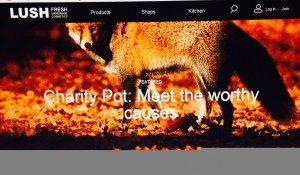 From this Winter, Lush Fresh Handmade Cosmetics will support the Blue Fox Group by donating the 100% proceeds of its Charity Pot hand and body lotion.   https://www.lush.co.uk/article/charity-pot-meet-worthy-causes

We are delighted to receive Lush’s valuable support for our campaign to protect wildlife. We are all volunteers with few resources and the Charity Pot will help to provide much needed funds to operate our campaign. Each Charity Pot features our campaign mission and web site details. It will hugely help spread our message against the threat of a return of hunting with dogs banned sports. We believe that most of the public are unaware that over 80% of Conservative MPs support a repeal of the ban and its vital that people press their MPs to support the ban instead .

The 2010 Conservative manifesto promised a free vote on the repeal of the ban and we don’t want to see the ill thought out pledge included in any political party’s manifesto for 2015 .Polls demonstrate that 80% of the public want fox hunting to remain illegal.

It is also great that the Charity Pot features the photo of a local fox taken by Andy Luck-a wonderful wildlife film maker and photographer, with 23 years of experience in documentary film making for the BBC.’

On its web site Lush describes how it supports good causes with the Charity Pot of which the majority of Lush’s funding is allocated to small, grassroots groups that are often best placed to make a real difference with limited resources and often struggle to find funding. Lush support small, grassroots organisations around the world working in the following areas: environment animal protection; and human rights. In 2013, Lush raised over £ 3 million globally and since the Charity Pot was launched in 2007 over £ 7 million has been given away around the world.

The Lush website says of Blue Fox: ‘The Blue Fox Group actively campaigns within Parliament. It organises anti-hunting events in the House of Commons to unite MPs against a repeal of the iconic Hunting Act 2004 which bans fox, stag, mink, hare hunting with dogs and the sport of hare coursing. It has six MP Patrons.’

As a cosmetics company, LUSH strives to ensure that their products follow the highest ethical standards of environmental sustainability and Fair Trade, and they are currently spearheading a global campaign to end animal testing in the cosmetics industry.

https://www.lush.co.uk/article/charity-pot-supports-animal-protection-groups   A list of the animal protection charities Lush support.