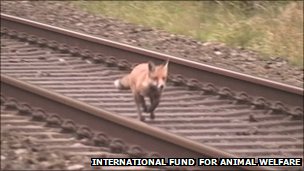 Six hunting hounds were hit and killed by a train when they ran on to tracks in the Devon countryside.

A train driver reported hitting the dogs near Ivybridge on Saturday.

Organisers of the Dartmoor Hunt, which owned the dogs, said it was a “very distressing and regrettable” incident.

Tom Lyle, joint master, said: “Nothing like this has ever happened to the hunt before and it was very upsetting to all involved.”

Network Rail confirmed a driver had reported hitting the dogs at about 12:00 GMT.

A spokesman said: “We were contacted by the police to alert us that a pack of hunting hounds were unaccompanied on the line.

“We then received a call from a train driver to say that he had gone through the area and had noticed the pack of hounds.

“He reported that his train had struck six of them, who died as a result of their injuries.”

Joe Duckworth, chief executive of the League Against Cruel Sports, called for the Dartmoor Hunt to be “held accountable” for what happened.

He said: “Surely if the hunt were following a trail, no-one in their right mind would have laid the scent next to a busy line?”

National newspaper reports links on the traffic chaos that out of control  hounds belonging to Hunts  have inflicted on public roads and railway tracks:

Pack hounds have also been killed  by cars on public roads .In February 2010, three of the Seavington’s hounds were killed in collisions with cars on the A303 near Tintinhull, Yeovil.  The incidents of  Hunt hounds on railway tracks could pose dangerous consequences to the lives of those unconnected with hunting such as train passengers.Those in the hunting community have a responsibility and a duty of care to the hounds they hunt with and to the local  community to ensure that their minority sport does not disrupt and impact upon the majority of the public who do not engage in hunting with hounds.

The latest incident follows other previous national  news items where Hunt  hounds have sometimes been reported on the railway tracks  in the past and even killed in some cases, as the links below testify: