Conservative animal welfare campaigners are urging ministers to move on from the “toxic” debate around fox hunting, as they call on the Government to focus its efforts on the agricultural industry.

Tory campaign figurehead Lorraine Platt said it is “disappointing” that hunting has made it back on the political agenda, when it generates so much “negative energy”.

She says the party should instead be looking at improving standards in food and farming, including banning cramped gestation cages for pigs and installing CCTV in slaughterhouses.

Speaking to the Herald at conference, Ms Platt expressed disbelief at reports that the newly-appointed Defra secretary Andrea Leadsom is keen to hold a vote on repealing the hunting ban.

But she was nevertheless optimistic that the minister will be responsive to her call to improve farm animal welfare.

“Its such a shame that we have to once again focus on this repeal issue – which is so negative and toxic – when we could be putting all our energies into helping to advance farm animal welfare,” she said. “Its unnecessary, it is outmoded, [we should] leave it in the past.

Earlier this year, she helped to set up the Conservative Animal Welfare Foundation, and has turned her attention to agricultural practices.

She believes the recent Brexit vote presents an ideal opportunity to reasses British farming standards – and she is urging the Government to build on the progress achieved under the EU.

“We would like to see live animal exports banned [because] we believe that animals should be slaughtered as close to home as possible,” she explained.

“We would also like to see an end to cages for hens and farrier cages for pigs [and] we would like to see mandatory CCTV introduced in all slaughter houses.

“With the Brexit referendum result we now have an opportunity to try and achieve this.

“Its very important that we retain the laws on animal welfare which originates from the EU… and we improve on them.”

She says one of the key factors in improving farming practices around welfare is through consumer choice. She and fellow foundation members want to see clearer labelling on a range of British food products.

“We as consumers can help advance welfare through our choices, just like we do with eggs,” she said.

“We would like to see labelling so consumers can make an informed choice about whether they are buying meat from an intensively reared system or [from] a high welfare farm.”

And she also wants to see the Government abandon the badger cull in favour of alternative Bovine TB prevention methods.

“We learnt our lessons from the cull Labour carried out… 11,000 badger were culled only for the scientific report to conclude that culling made no meaningful contribution to the control of TB in cattle,” she said.

“The measures that do work are improved biosecurity and stricter cattle controls – we’d like to see England follow Wales’ example on this.” 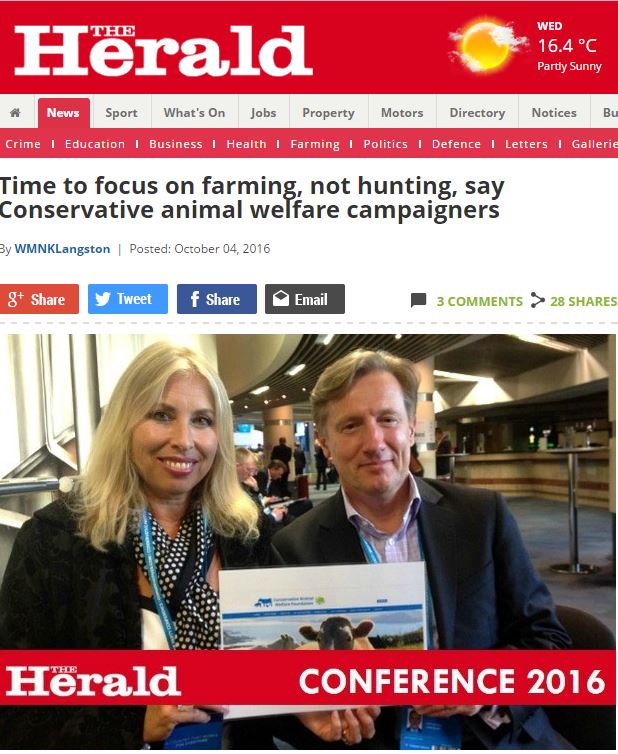