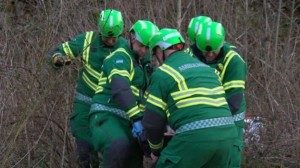 Darryl Cunnington was taken to hospital after being attacked in Stathern, Leicestershire.

Two men have been arrested on suspicion of assault after two anti-hunting campaigners were attacked while monitoring the Belvoir Hunt in Leicestershire.

Darryl Cunnington,  former policeman,  a campaigner for the League Against Cruel Sports – an animal welfare charity – and his colleague Roger Swaine were allegedly assaulted and had their cameras stolen by a masked group on quad bikes.

Cunnington was seriously injured and taken to hospital while Swaine sustained blows to the head and was bleeding heavily following the attack in Stathern, Leicestershire, according to a statement from campaigners.

Two men, aged 54 and 23, were arrested after police were called to the scene at about 3.50pm on Saturday. They have since been bailed pending further inquiries.

Eduardo Gonçalves, chief executive of the League Against Cruel Sports, said: “Our number one priority is the wellbeing of our injured staff.”

He added: “We are calling on the police to do a thorough investigation and for the perpetrators to be brought to justice.

“We are calling on the hunt to unreservedly condemn and apologise for this brutal attack, and on the hunting lobby to act decisively against the violence perpetrated by its supporters against law-abiding citizens who are ensuring the Hunting Act is upheld.”

The organiser of the hunt would not comment on the alleged assaults at the event.

The hunt hit national headlines recently when an investigator discovered – and subsequently released – a captured fox in a shed on land hunted by the Belvoir Hunt.

Last month, it was revealed that a police officer tasked with investigating illegal foxhunting was a member of the Duke of Rutland’s Belvoir Hunt in Lincolnshire.