Explorer spoke at a fringe event during the Conservative Party conference in Birmingham.

By Ian Silvera at the Conservative conference in Birmingham

Polar explorer Sir Ranulph Fiennes urged the Conservatives to drop their general election manifesto pledge to hold a free vote among MPs on repealing the 2004 fox hunting ban, as he addressed a fringe meeting at the party’s conference in Birmingham last night (2 October).

Fiennes also denied he had been a supporter of the blood sport in the past, despite marching on the Countryside Alliance’s Liberty and Livelihood rally in 2002. Instead, the explorer said he was a supporter of countryside “freedoms”.

Fiennes, who was speaking at a League Against Cruel Sports event and refused to take media questions, warned the “conflation of ‘countryside’ and ‘cruelty’ must stop”.

He also branded fox hunting as “brutal” after witnessing the slow death of the animal near his Cheshire farm following a local hunt.

In a direct appeal to Prime Minister Theresa May and the Tories, he said: “There is a rich strand in the Conservative narrative about compassion and about responsible stewardship of nature.

“The Conservative Party is the party of British values and Britain has led the way when it comes to animal welfare.”

Fiennes added: “If the Conservative Party is to thrive in the long term, it needs to engage with values andaspirations of younger voters. There are few issues which inspire and enrage young Britons more than animal welfare.

“Conservatism has never been about turning back the clock, it has been about progress and moving forward, including applying scientific knowledge to bolster the preservation of our wildlife.”

Environment Secretary Andrea Leadsom promised to bring back fox hunting as part of her bid for the Conservative leadership, in the wake of the EU referendum and David Cameron’s resignation.

A poll from Ipsos MORI, of more than 1,900 voters between 2 and 11 August, found that a vast majority (84%) of the British public is in favour of keeping the ban on fox hunting.

The Countryside Alliance has claimed the ban is a “blatant example of political prejudice”.

A statement on group’s website said: “The Hunting Act is unique in that its effects are entirely negative. It diminishes respect for parliament, it diverts police attention from serious crime, it brings no benefit to the environment, it is a blatant example of political prejudice and it does nothing for the welfare or conservative of the species its claims to ‘protect’.” 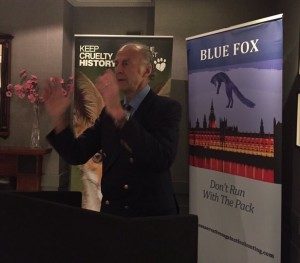