On this Boxing Day, as Hunts renew their call for the repeal of the hunting ban, it is significant to remember that this year has seen worldwide revulsion at the hunting of wild animals for sport. The global outcry after the senseless killing of ‘Cecil the Lion’ was followed two weeks later by the Governments dropped plans  in Westminster to introduce a Statutory Instrument that would have driven a coach and horses through the Hunting Act 2004. 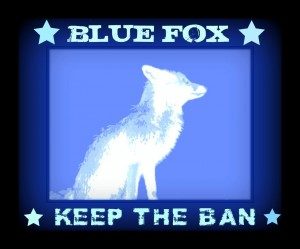 Anti-hunting Conservative and cross party MPs represented the will of the vast majority of the British people and helped prevent what would have been the return of hunting wild animals with packs of dogs by the back door. Nearly sixty Conservative MPs have stated that they are against the repeal of the Act and additionally indicated they were prepared to vote against any amendment to weaken the ban. Of the many Conservative MPs who have yet to publically declare their position a considerable number have privately said they will vote against repeal and any attempt to weaken the act by an amendment using a Statutory Instrument.Sir Roger Gale, MP for North Thanet, President of Conservative Animal Welfare and Patron of Blue Fox said:

“The hunting of wild animals with dogs has been consigned to the dustbin of history, along with cockfighting and bear-baiting, and the idea that this clock ought to be turned back is regressive and unpleasant.”

“Fox hunting is a pursuit from the past and like the overwhelming majority of the population I believe that is where it should stay, consigned to history. I believe that the legislation as it stands today requires better enforcement, and Parliament has better things to be concerned with than bringing back hunting foxes with hounds.”

” There is a growing intolerance of killing wildlife for sport, whether it be a noble lion in Africa or a humble hare here in England. The Government’s dropped plan to amend the Hunting Act 2004 with a Statutory Instrument in July would have made the Hunting Act 2004 unenforceable. Conservatives Against Fox Hunting would argue that the dropped amendment was never about wildlife management but meant to be a technical adjustment in order to relax the law so that hunting clubs could hunt wild animals with dogs for sport. Despite the amendment being dropped in July, we must not be complacent as the vocal pro hunt lobby within the Conservative party will continue to press for a repeal or weakening of the Act by whatever means they can. We encourage all those opposed to hunting with dogs to write to their MPs and express their views.”

Since the launch of Conservatives Against Fox Hunting (Blue Fox) in 2010 the number of Conservative MPs who have declared they would vote against any repeal of the Hunting Act 2004 has grown considerably. The Blue Fox Campaign now includes three Government Ministers amongst the founding Patrons. These include the Minister for Sport, Tracey Crouch MP ,Justice Minister, Dominic Raab and Caroline Dinenage, Parliamentary Under Secretary of State at the Ministry of Justice and Minister for Women and Equalities at the Department for Education.

“We will continue to work within the Conservative Party and with our growing number of anti-hunting Conservative MPs to explain our position and put across the fundamental, unarguable fact that in the 21st century it is unacceptable to hunt and kill an animal with dogs for sport.”