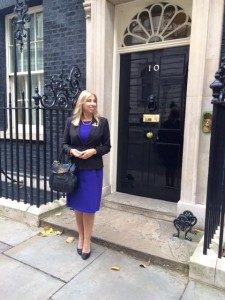 The Conservatives Against Fox Hunting( Blue Fox) Co Founders were invited to No10 Downing Street to discuss animal welfare.

We spoke upon how we initiated the Blue Fox campaign against repeal back in 2010, whilst one of our Co Founders was the Chairman of Esher & Walton Conservative Association and is now currently the Vice president for the Association.

A whole spectrum of animal welfare issues were discussed besides our  three campaigns of Blue Fox, Blue Badger( against the badger cull) and Blue Hare( a close season for hares )

We will continue to campaign to raise support to protect vulnerable wildlife and to help advance animal welfare campaigns in general.

The foreword is by William Hague and contains information on the Government’s portfolio of work in four major areas: ( from the Report  https://www.gov.uk/government/publications/international-animal-welfare-5-year-progress-report }

‘Tackling the Illegal Wildlife Trade (IWT); reducing the unnecessary use of animals in scientific research internationally; pressing for higher farm animal welfare standards in Europe and beyond; and safeguarding farm animal welfare protection in the context of International Financial Institution (IFI) funding.

Why does it matter? Animal welfare is an increasing concern amongst the general public, who frequently look to Government to take the lead in both maintaining and improving standards. As an internationally acknowledged exemplar of expertise and good practice, it is important that the UK plays an active role globally too.

For example, tens of billions of animals are farmed each year worldwide to produce food for a burgeoning global population; and there is a wide variation in welfare standards, with many animals subject to significant suffering.

Similarly, the use of animals in scientific research is an area in which the UK has a key role to play in supporting efforts by other countries to develop alternatives to animal testing wherever feasible, and to share best practice from our own very rigorous animal research regulatory framework. In addition we are tackling the illegal trade in wildlife, which is a truly global issue. To solve it, countries need to work together to reduce and ultimately remove demand for these products.

A concerted, co-ordinated international effort across source, transit and market countries is needed, with firm commitments made at the highest levels of government and the international system. This is an important issue and one that this Government takes very seriously.

We have achieved a lot. Notable successes in these areas include:

The London Conference on Illegal Wildlife Trade, held in February 2014, which resulted in a high level declaration of 25 commitments to tackling IWT, endorsed by 40 countries and the EU; and the announcement of £10m which would be made available to tackle IWT over the next four years.

Leading a major international programme of engagement that has put in place mechanisms for China, Brazil and other countries to learn from and adopt techniques that will refine, reduce and where possible replace the use of animals in their safety testing regimes.

Bringing about significant improvements in international standards for farm animal welfare through the World Organisation for Animal Health (OIE) in collaboration with the European Commission and other EU Member States.

Leading on efforts to ensure that lending by the multilateral banks we support adequately recognises animal welfare needs. Through targeted action we have secured commitments with major European and international organisations to safeguard animal welfare standards…’