Our animal welfare event at the Party Conference, hosted by Kevin Foster MP

The Conservative Party Conference has just come to an end in Manchester. Conservatives Against Fox Hunting were delighted to hold a fringe drinks reception jointly with the League Against Cruel Sports at the Midland Hotel which was well attended by delegates, MPs and those concerned with animal welfare.

The event was kindly hosted by Kevin Foster MP, who set the scene by talking about the importance of animal welfare to many people. Kevin said that the majority of the public did not want to see a return to hunting with dogs and it is time to move on and leave the ban in place. The vast majority of people in both rural and urban areas see hunting as a settled issue. 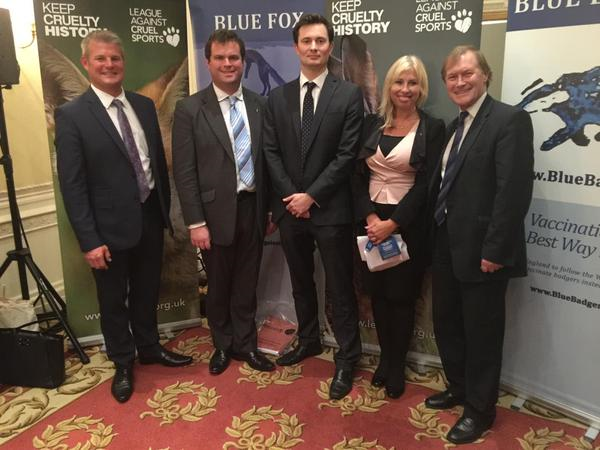 He further added that ‘ there is nothing contradictory about being a Conservative who cares about animal welfare.’

Tom Quinn, Director of Campaigns for the League Against Cruel Sports then spoke on snaring, bullfighting, racing, greyhound welfare , live bird shooting and hunting with dogs. Tom said that this is not a party political issue and the majority of supporters from all parties support the ban on hunting with dogs.

The joint event was attended by MPs Sir David Amess and Stuart Andrew, Conservative Councillors and supporters. It was a major success for the League and Blue Fox, and underlines that there are many Conservative delegates and MPs who are concerned about animals and believe animals matter.

I am delighted to welcome you all here and to talk on not only our own animal welfare campaigns of Conservatives Against Fox Hunting also known as Blue Fox, Blue Badger and Blue Hare but to touch on the general issue of animal welfare in the UK. This is very timely as yesterday was World Animal Day.

Why does it matter? Animal welfare is an increasing concern amongst the general public, who frequently look to Government to take the lead in both maintaining and improving standards.

It is important that the UK Government plays an active role globally too.

For example, tens of billions of animals are farmed each year worldwide, and there is a wide variation in welfare standards, with many animals subject to significant suffering. UK welfare standards are amongst the highest in the world yet there is much more we need to do. The truth is that while progress is being made, we could be doing a lot more to eliminate animal cruelty and improve animal welfare.

Conservative MPs such as Henry Smith MP, the Chairman of the Associate parliamentary Group for Animal Welfare have been at the forefront of advocating CCTV in slaughterhouses to help lessen the suffering of farm animals. Philip Hollingbone MP led the debate earlier this year to end slaughter without pre stunning which was well attended by MPs. Neil Parish has also called for an end to the long distance live transportation of animals.

But Progress is frustratingly slow , look how the implementation of legislation to ban beak-trimming of commercial hens by 1 January 2011 has been postponed until at least 2016,

The use of animals in scientific research is an area in which the UK has a key role to play in supporting efforts by other countries to develop alternatives to animal testing. However, the recent licence to allow a new Beagle breeding location here in the UK was deeply disappointing and heavily condemned. We need to focus on alternatives to directly replace the use of animals and technological advances which allow completely different approaches, not involving animals, to answer research questions.

We welcome the Conservative manifesto commitment to ban wild animals in circuses and hope that this is achieved as soon as possible.

The manifesto also states that the Conservatives will oppose any resumption of commercial whaling, and seek further measures at the EU and internationally to end shark-finning and promote effective worldwide measures for tuna conservation.

It is excellent news that our Government is committed to tackling the illegal trade in wildlife, which is a truly global issue and threatens our most iconic species with extinction. To solve it, countries need to work together to reduce and ultimately remove demand for these products. Our border police is responsible for operations to seize illegal wildlife products and has been seizing products in transit and passing seizure information back to the source country.In February last year the UK hosted a high level international conference in London on tacking the illegal wildlife trade, attended by leaders from over 40 nations from Africa, Asia, Europe and the Americas.

There has been much global outcry at the senseless illegal killing of Cecil the Lion which has flagged up the cruel sport of trophy hunting for sport. A total ban on the import of animal trophies into the UK would be very welcome.

We would like the Government to lead the way with an import ban, coupled with working with source countries to create humane and sustainable alternative revenues in place of trophy hunting.

It is easy to criticize other countries for allowing trophy hunting to continue yet meanwhile, tens of millions of game birds are bred to be shot for ‘sport’ each year here at home for a minority sport

This brings me to our own campaigns on protecting wildlife here by supporting the landmark ban on hunting stags, hares, mink and foxes with dogs which has no place in the 21st Century. Conservatives Against Fox Hunting has 5 Conservative MP Patrons, including 3 Government Ministers and we encourage more Conservative MPs to join us and say No to any repeal or weakening of the Hunting Act 2004. Cruel sports are a minority pastime and the majority of the public do not participate in sports which involve the killing of wild animals and birds for sport whether it is by hunting for dogs or shooting for recreation.

Our Blue Hare campaign calls for a close season for hares, whose numbers have declined by an estimated 80% in the last 100 years. 400,000 hares are shot each year, leaving tens of thousands of baby leverets to starve to death alone when their mothers are shot. This is a huge welfare problem. We call for the Government to introduce a close season for hares as soon as possible to bring us in line with most of Mainland Europe, Scotland and Northern Ireland who already operate close seasons for hares.

Finally, it is National Badger Day tomorrow. Badgers are an iconic symbol of the British countryside and are a protected species. Yet they are being culled needlessly in badger culls to help tackle Bovine TB. Eminent scientists have spoken out against badger culling saying it makes no meaningful contribution to the control of Bovine TB in cattle.We call on the Government to follow the Welsh Government’s programme which focuses heavily on cattle measures to eradicate TB and vaccinates badgers. According to Chief Veterinary Officer for Wales, Professor Christianne Glossop, incidence of bTB in Wales have fallen by 28%; the number of infected cattle slaughtered has fallen by 45%; and 94% of Welsh herds are TB free. This has all been achieved without culling badgers.We say listen to the scientists and abandon the cull.

The way we treat our animals is an important reflection of our society’s values.

Thank you for your kind attention.