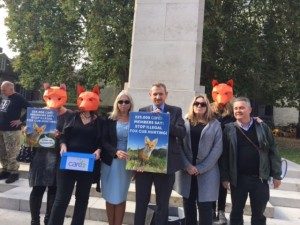 Our Blue Fox Co Founder gave a speech against the cruel activity of cub hunting alongside the CEOS of the League Against Cruel Sports, Brian May’s Save Me and the Badger Trust before campaigners in Westminster on the 30th September.

The Care2 petition to stop illegal fox cub hunting signed by 225,000 members of the public was handed in by campaigners to DEFRA amongst a press and photo shoot to help raise awareness on this cruel sport.

Our Co Founders speech can be read here:

‘Thank you to everyone for coming here today to show their support against cub hunting.

Cubbing is an exceptionally cruel aspect of hunting.it involves training young hunt hounds to be set upon fox cubs. It is a barbaric practice.

Foxes are wild members of the dog family. We all condemn setting dogs onto dogs in dog fighting. There is no place for the brutal practice of cub hunting in modern society. There is no justification to return outmoded fox hunting.

We have seen in the latest poll today for the League Against Cruel Sports that 73% of Conservative supporters do not want to see a return to fox hunting. Well Done to the League on this. Blue Fox represents the majority of Conservative supporters against hunting with dogs . There are now over 55 Conservative MPs against the repeal of the ban . WE encourage more Conservative MPs to represent the majority opinion against repeal and say no to a return of fox hunting. Blue Fox has 5 MP Patrons including 2 Govt Ministers- the Minister for Sport and the Minister for Equalities and two knights of the realm, Sir David Amess and Sir Roger Gale.

I would like to read out a few words from our Blue Fox Patron Sir Roger Gale whose article is featured in the conference edition of Politics First:

“When it comes to concern for animals, party affiliation is irrelevant. Is there anything more fundamentally British than caring for those around you? For us, that quintessentially British sense of duty must also be extended to those who also feel pain and fear. The sight of a fox chased to exhaustion and killed by a pack of hounds, is repugnant whether you are blue, red, yellow, or of any other or no political persuasion. It speaks to the strength of British politics that members of all parties can come together to defend the most vulnerable,whether human or animal, in our society.

As Conservatives, we are proud to play a leading role in that fight, and as MPs, we will protect the Hunting Act. Defending animal welfare is a fundamentally British value – decent, sensible, and reasonable.”

Keep the ban. Thank you! 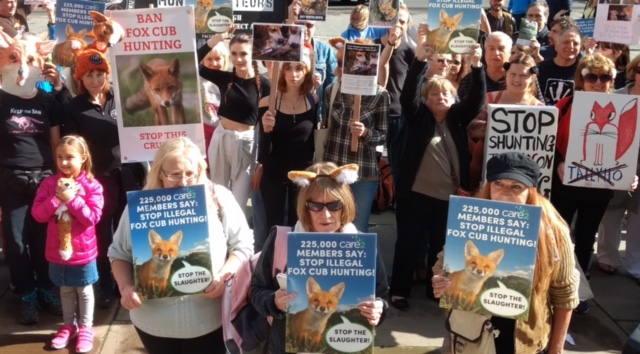