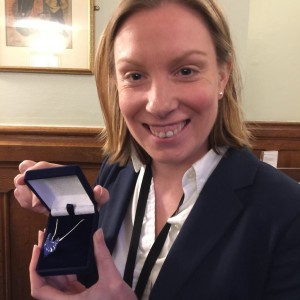 The below article is from the Conservativehome  article, 15th July 2015

Tracey Crouch demonstrates, in a manner the hunting lobby will find disconcerting, that the Conservative Party has changed. The Prime Minister has condemned the Scottish National Party for its “entirely opportunistic” decision to vote against the proposal to relax the hunting ban in England, which was to have been put to the Commons today.

But the postponement of that measure was also caused by the prospect of between 20 and 30 Conservative MPs voting against it. And conspicuous among these opponents of hunting is Crouch, promoted since the General Election from the backbenches to the high-profile post of Sports Minister.

On Sunday, under the headline “Top Tory leads rebellion against relaxation of foxhunting ban”, she voiced her opposition in the Observer: “The vote could be close, so I hope colleagues on all sides … will not be fooled by the spin of the pro-hunt lobby and inadvertently vote for a measure that makes a mockery of public opinion on foxhunting.”

What a wealth of paradox Crouch’s stand opens up. Tories admire cussedness, and the willingness to speak one’s mind.

But Tories also love foxhunting, even if with the unillusioned eye of Surtees, and see it as one of the greatest and most glorious of our traditions, with which no mere government, composed of townie sentimentalists, has the slightest right to interfere.

However, Tories also see merit in winning elections, by showing that the Conservatives, rather than Labour, represent the nation as it actually is.

When Crouch, who was born in 1975 in Ashford, became candidate for Chatham & Aylesford in November 2006, Labour held it with a majority of 2,332. This was one of the belt of Kent seats the Conservatives had to win in order, as one backbencher put it, “to get back in the game”, but he reckoned it was “quite brave” of Crouch to take it on: she was certainly not being ushered into a safe seat.

In her maiden speech, she described the severe poverty in some parts of the seat, and went on: “While I am in Parliament, I want to accomplish many things on behalf of all my constituents, but I hope that improving the plight of the poorest will be my greatest achievement.”

She also observed: “Low income, family breakdown, addiction, mental health problems and criminal behaviour contribute to a lack of expectation that, in turn, leads to inactivity.”

Inactivity is not Crouch’s thing. After Folkestone School for Girls, a grammar school, she read Law at Hull, and on graduation “accidentally” (her word) found herself working for various Conservative MPs, including Michael Howard, from Folkestone, Damian Green, from Ashford, and latterly David Davis.

She had been bitten by the political bug. From 2003-05 she undertook with success the arduous role of Chief of Staff to Davis: “a slight miasma of rebellion has hung about her ever since,” one observer remarks.

On entering the House in 2010, she demonstrated her independence of mind by abstaining in the tuition fees debate, opposing regulation of the press and opposing a fully elected House of Lords.

She also voted against the badger cull, calling it “barbaric and indiscriminate”. As she told the New Statesman: “I did something I wish I hadn’t: I read the evidence, which very plainly showed the cull wasn’t going to make any significant difference.”

Somewhat disconcertingly, she also created a Facebook page for her cats, Mungo and Basil. And she is one of five patrons of Conservatives Against Fox Hunting, also known as Blue Fox, who are currently Tory MPs, the other four being Caroline Dinenage, David Amess, Dominic Raab and Sir Roger Gale.

The former Queen guitarist, Brian May, who is a leading animal rights campaigner and has denounced Cameron for supporting foxhunting, came to campaign for her during the general election.

Crouch established herself as a popular backbencher, who would talk to everyone, and was as good at talking to women as to men.

She joined the curry club: a deliberately informal group of avowedly blue-collar backbenchers first elected in 2010.

People recognised that she was not just rebelling for the sake of rebelling, but on subjects she actually believed in. More than most politicians, she allows her emotions to show, or cannot help letting them show.

In 2014, she admitted she was sorry not to have been given ministerial office. Her mixture of vulnerability and toughness helps lend her conviction, or even (dread word) authenticity.

But she was best known for her love of football, which extends to being a qualified FA coach and for eight years coaching a girls’ team. She was a member of the Culture, Media and Sport Select Committee, chaired by John Whittingdale, and spoke out against Russia and Qatar hosting the World Cup.

Then something improbable occurred. Whittingdale was made Culture Secretary and Crouch became Sports Minister.

Cameron had demonstrated his subversive preference for putting people in charge of things which they actually know something about.

She is “appalled” by the minuscule proportion of the Premier League’s income which is invested in grassroots football, of which she said in her first major speech as a minister:

Grassroots didn’t exist for people like me growing up. If it was there at all it was inaccessible to those on low incomes. My football girls don’t know how lucky they are. They don’t appreciate that 30 years ago I was banned from playing football in the playground. We’ve come a long way but ultimately I want everyone to have the opportunity to be involved, especially those who aren’t seen as the traditional participants.

So Crouch puts herself on the side of the outsider, the untraditional, the poor. For a Conservative Party intent on colonising Labour territory, that is a useful way of looking at things.

And in political terms, it may even be beneficial that she has adopted another cause, hostility to foxhunting, which is so closely associated with Labour.

Could it be that in alliance with Nicola Sturgeon, Crouch and the rest of the anti-hunting Conservatives have done Cameron a favour?