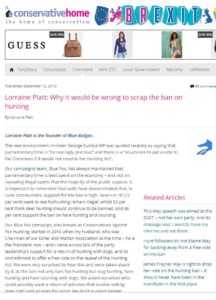 This article first appeared on ConservativeHome website on 12th December 2013

The new environment minister George Eustice MP was quoted recently as saying that parliamentary time is “increasingly precious” and there is a “reluctance to put a vote to the commons if it would not reverse the Hunting Act”.

Our campaigns team- Blue Fox, have always maintained that parliamentary time is best spent on the economy and not on repealing illegal sports that the majority of the public support. It is important to remember that polls have demonstrated that in rural communities, support for the ban is high. Seven in 10 (72%) want to see foxhunting remain illegal, whilst 82% think deer hunting should continue to be banned and 86% support the ban on hare hunting and coursing.

Our Blue Fox campaign also known as Conservatives Against Fox Hunting in 2010 started when my husband,who was Chair of our Esher and Walton Association at the time- he is the president now – and I came across talk of the party leadership’s support of a return of hunting with dogs, and it’s commitment to offer a free vote on the repeal of the hunting act 2004. Now we were very surprised to hear this in late 2009 and were quite taken back by it, as the ban not only bans fox hunting but stag hunting, hare hunting and hare coursing with dogs. We thought- who could possibly want a return of activities which involve setting dogs onto wild animals for sport. We don’t support badger baiting or dog fighting which share the same characteristics of setting dogs onto animals for the recreational sport of a minority of people so why should we want a return of the same cruelty to stags, hares and foxes.

When we were out canvassing and handing out leaflets for our local Conservative Association, people on their doorsteps would speak to us of their concerns about a return of hunting with dogs and ask why should they want to support a party that supported a return of illegal sports?

We then built a simple website to say as Conservatives, let’s keep hunting banned and not waste precious parliamentary time on a ban that the majority of the public support and get on with getting the economy on track etc

We received tons of emails from people expressing their relief that other Tories felt the same way about this issue. Some even said that they did not feel they could vote Conservative at this time as they were so concerned about the leadership’s support for repeal. Our mission is to dispel the myth that all Conservative supporters are pro hunting. Poll after poll has demonstrated that three quarters of the population want to see fox hunting remain illegal.

So from one basic homemade website, we then decided to take it further and set up the online group for everyone who had emailed us to connect further on our Facebook site and twitter sites which have a combined following of thousands of followers, including MPs, Peers and Councillors, Association Chairs, agents, Conservative candidates, Associations and environment journalists all over the country. Blue Fox activists are all volunteers who give up their time to speak out to protect wildlife.

We very recently gave a talk against hunting with dogs to the Esher & Walton Conservative Women’s organisation with Conservationist Bill Oddie OBE.The event was very successful and was also attended by both the Mayor of Elmbridge and the Conservative leader of the Council amongst the audience of Conservative supporters, Councillors and the Esher and Walton CWO committee.

It is significant that many of our team are Conservative women Councillors, Conservative Women’s Future Chairs, agents, Association Chairs and presidents and activists. The repeal issue is toxic and damaging to the progressive image of the Conservative party brand and alienates some people from engaging with the party. No party can afford to alienate supporters, especially women , which every party is keen to connect with.

In October 2013 the Sunday Express described the’ Blue Foxes’ as a formidable group of Conservative women who are a ‘highly active and vociferous group’. It is easy to win against the pro hunting arguments as not one of the arguments will stand up to scrutiny but it is very challenging when some Conservative MPs dismiss the logical reasons for keeping illegal sports banned in favour of supporting a well-connected but minority hunting lobby group .

We have four Conservative MPs as our patrons- Sir Roger Gale, the Chairman of Conservative Animal Welfare, Caroline Dinenage, Tracey Crouch and Mike Weatherley.We are members of the Associate Parliamentary Group For Animal Welfare in the House of Commons and the Partnership For Action Against Wildlife crime- PAW.

I was honoured to be awarded the International Fund For Animal Welfare’ Campaigner Winner 2012 at a ceremony in the House Of Lords and to be shortlisted as a nominee for the ‘Inspiration Awards For Women 2013’ award whose nominees included two Olympic Champions,Helen Mirren,and Victoria Beckham.

We will continue to be vigilant for any back door efforts to ease or amend the hunting ban and will continue with our determined work to promote wildlife protection campaigns amongst politicians in Westminster. The Hunting Act is here to protect wildlife from hunting with dogs for sport and is not about political point scoring. It is about doing the right thing for our wildlife , who have no voice of their own. There will always be a minority of people who will flaunt laws on dogs fighting , badger baiting, hare coursing etc for sport but that does not mean that these laws should not be in place. The bull baiting was flouted for several decades before it was finally accepted and it was highly contested in it’s day. There is no place for setting dogs onto animals for sport in the 21st century.

Our sound bite is ‘Don’t Run With The Pack’ and this signifies both standing up for your own authentic convictions despite peer pressure and to take a stand against the legalisation of wild stags, foxes and hares once again being hunted by packs of dogs for sport.