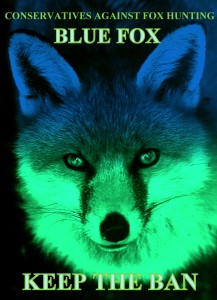 Contrary to popular belief, recent months have shown opposing views within the Conservative party about repealing the ban on hunting with dogs

Conservatives Against Fox Hunting, also known as Blue Fox, believe it is timely to remind the country that there are a growing number of Conservative MPs who are prepared to clearly state their opposition to the Repeal of the Hunting Act 2004 and the return to hunting with dogs. The ban is almost ten years old and bans the hunting of stags, hares, foxes and hare coursing by dogs for sport.

We recently gave a talk against hunting with dogs to the local Conservative Women’s organisation with Conservationist Bill Oddie OBE.The event was very successful and was also attended by both the Mayor and the Conservative leader of the Council amongst the audience of Conservative supporters and Councilors. Women continue to be among our most active supporters which the party leadership should take note of.”

The new environment minister George Eustice MP was quoted recently in November 2013 as saying that parliamentary time is “increasingly precious” and there is a “reluctance to put a vote to the Commons if it would not reverse the Hunting Act.”

Blue Fox, has always maintained that parliamentary time is best spent on the economy – and not on repealing illegal sports that the majority of the public oppose which is demonstrated in poll after poll.

Our supporters will continue to resist any back door efforts to diminish or amend the hunting ban in any form. We will sustain our purposeful work to advance wildlife protection campaigns amongst politicians in Westminster.

The Hunting Act 2004 is in place to defend wildlife from hunting with dogs for sport, and transcends party affiliation. It is about doing the right thing for our wildlife, who have no voice of their own. Sadly, a minority of people continue to defy bans on dog fighting, badger baiting, hare coursing and so forth for sport. But that does not mean that these laws should be repealed. Bull baiting was flouted for several decades before it was finally accepted and was highly contested in it’s day.The longer the ban remains in place, the more embedded in society it becomes.